To say we are now entering the season of Spring and that Easter has just been and gone the weather here in rural Staffordshire has been decidedly awful – snow, hail and rain – but today we have sunshine and warmth. Just the thing to make me crave warm salads and fresh from the oven crusty bread.

Sydney Food by Bill Granger inspired the salad recipe. Why Bill? Well it’s not his writing, not so much that his recipes make me want them right away or that the food is greatly familiar to me, but simply because the photography is stunning and they just give an aura of summer warmth; something quite lacking here at the moment. 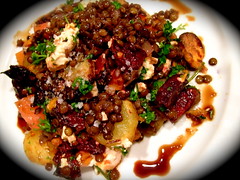 I used Puy lentils for the salad which are small slate-green lentils with a delicate blue marbling. Puy lentils are considered by many to be the best lentil because of their unique peppery flavour and the fact they hold their shape during cooking.  Castellucio lentils would also be well suited to this salad though, but not quite so pretty to present.

The salad was absolutely stunning, summery yet warming with an edge to it that just made you want to go back for more and more, even though it was actually very filling.  The combination of firm peppery lentils, crisp vegetables and meltingly soft cheese gave an incredible taste sensation, all lifted by the slightly sharp dimension of the balsamic vinegar.

It would be excellent served at room temperature too, providing the environmental conditioned allowed.

For me salad cannot be without bread in this case; pain de campagne inspired by Savory Baking from the Mediterranean: Focaccias, Flatbreads, Rusks, Tarts, and Other Breads by Anissa Helou. 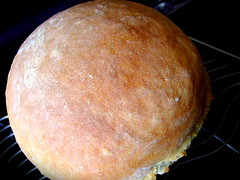 Pain de Campagne is a French country style bread, made from a made from a natural leavening similar in idea to sourdough. It is traditionally shaped as a boule but may be formed into a batard instead.

This bread recipe is very unusual in that it doesn’t require a whole-wheat starter as most French country style breads do; that’s partly why I followed it, I wanted to see if it could really be a success. Success?  Well if everyone clamoring for the last slices of the loaf makes a success, it was a magnificent one.

The bread had a crisp, crunchy outside with a light and airy middle which somehow managed to keep a certain buttery chewiness to it. Isn’t it amazing how so few ingredients can end up being something so special?  It tasted ever so slightly sour and salty, so reminiscent of the breads I’ve eaten on ‘the continent’.

Although the recipe was actually shorter and less complex than many others for pain de campagne I’ve read it certainly isn’t one for the time pushed as it takes the best part of a day.  I kneaded my bread dough by hand but I suppose it would be possible to use a free standing mixer or food processor, just be very careful not to overwork the dough.

A labour of love? Yes. But so worth it for the taste and smell of home-baked bread cannot be beaten.