Have you ever seen someone with triangular ears?

Purim is celebrated on the 14th of Adar (March) with masquerade parties, listening to the Book of Esther read out in the synagogue and sending “mishloah manot” – packages of goodies – to friends and the needy. In those packages, you will usually find at least a couple of Ozney Haman, known outside of Israel as Hamentaschen (Yiddish for “Haman’s pockets”).

Haman was the bad guy in the Book of Esther. This chief minister to King Ahasuerus in Shushan, Persia felt he wasn’t getting enough respect. Mordechai the Jew refused to bow down to him. So he made up his mind to kill all the Jews in the kingdom. He picked a number out of a hat and set the day for the massacre: the 13th of Adar. But Esther, the queen, was a Jew herself, and Mordechai was her uncle. At Mordechai’s urging she leapt into action. She invited Haman to a banquet and he ended up putting his foot in his mouth. The king asked him for advice on how best to honor someone. Haman thought the king was referring to him. “Dress this person in royal garments, seat him on the king’s horse, and lead him through the streets announcing his worthiness to one and all,” Haman told him. Ironically, it was Mordechai the king wanted to honor, and Haman was ordered to lead the horse and proclaim Mordechai’s greatness. Esther then whipped up another banquet and revealed Haman’s plot. The king was furious and had Haman hung on the 13th of Adar, on the gallows prepared for Mordechai.

Inspired by the lovely Francesca I decided to cook some Ozney Haman for Purim. Oh and yes I do realise I’m rather late in doing so; why?  Well I’d like to claim it’s because I didn’t have much time for baking or that I didn’t have all the ingredients to hand but if I did I’d be lying, I actually put off baking them because I thought they’d be really tricky and turn into a complete kitchen disaster – an event I avoid at all costs as it can put me off certain foods for months.  Anyway on visiting my friend Ilana’s blog I found this, a recipe for Ozney Haman which didn’t sound too complex and I decided to take the plunge. Traditionally they contain a poppyseed filling (to symbolise Hamans dirty ears) but I decided to rebel slightly making fillings with lemon jam (a homemade gift from Carlotta), nutella and vanilla halva (a gift from Francesca).

Surprisingly the Ozney Haman don’t look at all like ears (to me anyway), I mean have you ever seen anyone with triangular shaped ears? No, me either, but they taste so fabulous and traditions like these are so lovely that it doesn’t matter a jot really.I’m so very glad I did attempt these, they’re stunning.

So mine don’t look as neat and pretty as Ilana’s but for a first attempt I don’t reckon they look so bad. 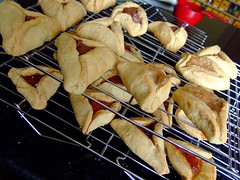 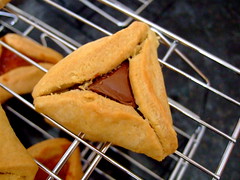 The cookies were melt in the mouth, very short but without being crumbly. They went down a storm, especially when I served them alongside a steaming hot mug of Israeli herbal tea, which was also very kindly sent to me by Francesca.

What wonderful friends I have.