March 20th was officially the 2008 commencement of Spring.  Originally Springtime was celebrated as a Pagan festival to honor the Goddess Eostre. Eostre is now commonly believed to be linked to the Greek for frenzy and to spring into life.  Hence the connections to the celebration of the beginning of new life such as the sprouting of plants, birth of chicks and lambs after the cold and rather barren season of winter. It is from the term Eostre that we obtained the modern word Easter.

Easter (also called Pascha), is the most important religious feast in the Christian liturgical year. Christians celebrate this day in observance of their belief that Jesus rose from the dead on the third day after his crucifixion, now estimated to have taken place between the years AD 26 and AD 36.

Many non-religious cultural elements have become part of the holiday, and those aspects are often celebrated by many Christians and non-Christians alike, such as the giving of Easter eggs.Easter also refers to the season of the church year called Eastertide or the Easter Season.

Traditionally the Easter Season lasted for the forty days from Easter Day until Ascension Day but now officially lasts for the fifty days until Pentecost. The first week of the Easter Season is known as Easter Week or the Octave of Easter. Easter also marks the end of Lent, the period of 40 days which comes before Easter, beginning on Ash Wednesday. For many Christians, this is a period of fasting and repentance in preparation for Easter, culminating in a feast of seasonal and symbolic foods.

Easter is termed a moveable feast because it is not fixed in relation to the civil calendar. Easter falls at some point between late March and late April each year (early April to early May in Eastern Orthodox Christianity), following the cycle of the moon. After several centuries of disagreement, all churches accepted the computation of the Alexandrian Church (now the Coptic Church) that Easter is the first Sunday after the first fourteenth day of the moon (the Paschal Full Moon) that is on or after the ecclesiastical vernal equinox.

There are many food traditions associated with Easter, many of which are specific to different countries.

In the late 17th century, girls in service brought a rich fruit cake called simnel cake home to their mothers on the fourth Sunday of Lent. The cake was enriched with marzipan and decorated with 11 marzipan balls representing the 12 apostles minus Judas, who betrayed Christ.

The Greeks and Egyptians ate small cakes or buns in honour of the respective goddesses that they worshipped. Buns marked with a cross were eaten by the Saxons to honour their goddess Eostre – it is thought the bun represented the moon and the cross the moon’s quarters. To Christians, the cross symbolises the crucifixion.

Throughout history, eggs have been associated with Easter celebrations. In ancient times, the egg was a symbol of fertility and new beginnings. Christians adopted this to represent their Saviour’s resurrection. The tradition of colouring eggs in bright colours – representing the sunlight of spring – goes back to the Middle Ages and is still an important custom for many Christians. In Germany it’s traditional to paint eggs green and eat them on Maundy Thursday while in Greek and Slavic cultures eggs are dyed red as a symbol of the blood of Christ. As time has gone on, the decoration has become more elaborate with colourful patterns, images of flora and fauna, and in some cases delicate gold and silver leaf details. The most famous and ornate of Easter eggs must be the jewelled and enamelled eggs that Fabergé was commissioned to make for the Russian tsars.

Easter is linked to the Jewish Passover not only for much of its symbolism but also for its position in the calendar. The Last Supper shared by Jesus and his disciples before his crucifixion is generally thought of as a Passover meal, based on the chronology in the Synoptic Gospels (Matthew 26:17; Mark 14:12; Luke 22:7). The Gospel of John, however, speaks of the Jewish elders not wanting to enter the hall of Pilate in order “that they might eat the Passover”, implying that the Passover meal had not yet occurred (John 18:28; John 19:14). Thus, John places Christ’s death at the time of the slaughter of the Passover lamb, which would put the Last Supper slightly before Passover, on 14 Nisan of the Bible’s Hebrew calendar. According to The Catholic Encyclopedia, “In fact, the Jewish feast was taken over into the Christian Easter celebration”

Passover is one of the most important religious festivals in the Jewish calendar.

Jews have celebrated Passover since about 1300 BC, following the rules laid down by God in Exodus 13. Every year, Jews celebrate the Feast of Passover to commemorate the liberation of the Children of Israel, as commanded by God in Exodus 13.The celebrations last for seven or eight days, depending on where you live. Passover in Israel lasts seven days – the first and second days are observed as full days of rest (yom tov), and the middle five as intermediate holidays (hol ha-moed). Outside of Israel Passover lasts eight days and the first two and last two days are observed as full days of rest. The Torah says to celebrate Passover for seven days but Jews in the Diaspora lived too far away from Israel to receive word as to when to begin their observances and an additional day of celebration was added to be on the safe side.

Before celebrations can begin the house must be cleaned from top to bottom to remove any traces of chametz (leaven) from the home. This commemorates the Jews leaving Egypt who did not have time to let their bread rise, but also symbolises removing ‘puffiness’ (arrogance, pride) from their souls. The day before Passover begins there is a ritual search for chametz in every home.  A Jew may not eat chametz or derive benefit from it during Passover. He may not even own it or feed it to animals. Traditionally any chametz in his possession, or utensils used to prepare food with chametz, have to be temporarily ‘sold’ to non-Jews. They can then be ‘bought’ back after the holiday.

The highlight of Passover observance takes place on the first two nights, when friends and family gather together for ritual seder meals. Seder means ‘order’ and the ceremonies are arranged in a specific order. Special plates and cutlery are used which are kept exclusively for Passover.The Haggadah is a book which tells in fourteen steps the story of the Jewish experience in Egypt and of the Exodus and revelation of God. As the story of each of the ten plagues is read out a drop of wine is spilt to remind Jews that their liberation was tinged with sadness at the suffering of the Egyptians.

Each of the components of the meal is symbolic. The food is eaten in ritual order and its meaning and symbolism is discussed:

So with all this in mind, and  I decided to plan a meal that would encompass both Christian and Jewish traditions.  Here’s what we ate:

Roast Leg of Lamb with ‘Sephardi Stuffing’  and Golden Chickpeas

(Adapted from Feast: Food That Celebrates Life by Nigella Lawson) 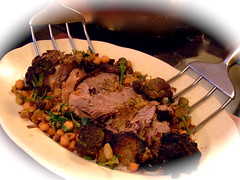 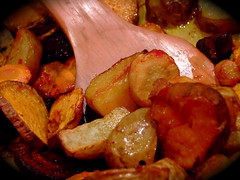 (Adapted from The Book of Jewish Food: An Odyssey from Samarkand and Vilna to the Present Day  by Claudia Roden) 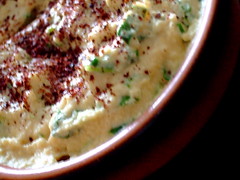 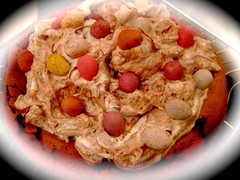 Owing to the fact that my father is none too keen on overly lamby flavours I decided to not just stuff the lamb but marinade it overnight too.  I used a yogurt based marinade containing hawji spice blend among other spices and lemon juice.  I think this helped to tenderize the lamb as well as give it an amazing flavour.

I stuffed the boned out leg of lamb with the Sephardi stuffing detailed in Feast: Food That Celebrates Life but to that I added a few golden sultanas.

I also dissented from Passover tradition and didn’t cook the lamb in any liquid, choosing instead to place the lamb directly on my oven rack over a roasting tray, allowing the fat to trickle out and then be used to cook the roasted vegetables. This was a great decision, the lamb was melting tender and the vegetables took on a great flavour.

I loved the flavour and texture of the stuffing, but was a bit disappointed by the very small amount of it, next time I will make up a batch separately to serve alongside the lamb as well as actually stuffing the lamb.

Just for a little extra moisture and another taste dimension I made some herby humous following the recipe in The Book of Jewish Food: An Odyssey from Samarkand and Vilna to the Present Day by Claudia Roden.  As per Claudia’s instructions I used dried soaked chickpeas for the humous and I have to admit it was so much better than when made with tinned instead, much better in texture and flavour.  No more humous from tinned chickpeas for me. The only additions were a little chopped mint, coriander and wild garlic which gave a wonderful edge.

The Easter Egg Nest Cake worried me a little, I’d tried making it a couple of years back and it was disasterous – it just didn’t rise at all and I ended up with a pancake, other people I know found it too rich and overpowering. Oh I so wanted it to work this time and it did, I ended up with a light airy and fluffy cake base which when filled with whipped cream and swirls of chocolate was absolute bliss to eat.  I topped it with Cadbury Mini Eggs which the lovely Brenda had been kind enough to send me.

With the left over lamb I made a little salad the following day – nothing special just shredded lamb, mixed salad and a simple sherry vinegar dressing, very easy, very simple, very very delicious. 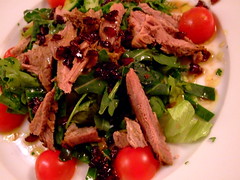