If I were to say to you jarred cherries in syrup you’d probably gasp, shudder and immediately think of the 1970’s culinary kitsch, well you’d be kind of right and kind of wrong. Why? Well I did end up making a very ’70’s desert – cherry cheesecake but it was totally 21st century in make up.

The recipe came by way of Nigella Lawsons latest book Nigella Express which is a great collection of nostalgic, eclectic and downright delicious recipes. Yes she does use rather a lot of ‘cheat’ ingredients along the way but they’re easily adapted back to the long method, should you so wish, and anyway what is wrong with a little cheating from time to time so long as it’s healthy and not full of additives, e-numbers and other such nasties?

This cheesecake is unbaked, I usually would go for the baked variety, believing they are lighter and better in texture but I just didn’t have the hours in the day this time around. I was pleasantly surprised by the nature of unbaked variety, very creamy and rich but the sharpness of the cherries offset that nicely. 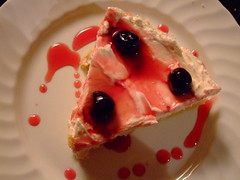 Nigella specifies French cherry conserve for the topping but I used some jarred Italian cherries in syrup sent to me buy my marvelous friend Carlotta and they were stunning. Following the Italian theme along I used mascarpone cheese instead of regular cream-cheese too which worked superbly.

This is definitely a keeper dessert, quick, simple, effective and most importantly immensely tasty.