Inspired by the gorgeous photography and recipe ideas in Medina Kitchen: Home Cooking from North Africa

by Fiona Dunlop and a plentiful supply of rhubarb I set about playing with flavour combinations and dessert ideas.  I really didn’t want to go down the pie or crumble route, although they’re absolutely fantastic in their own right, I seem to have made so many of them recently.

I decided upon an orange blossom infused frangipane tart. 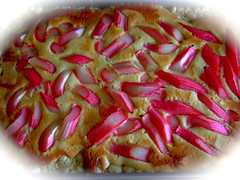 The earliest references to frangipane dates from about the mid 17th century, and was applied to a custard tart that included both ground almonds and pistachios. Since then, it is most often used to refer to an almond-flavored pastry cream.  With this in mind I used half almonds and half pistachios in this pudding.  The French links with frangipane are significant here too, given the connections to Morocco.

If possible it is best to buy the nuts whole and grind them yourself for the frangipane, just be careful not to over process them as they can then become oily.

The frangipane was soft and moist with a wonderful nutty aroma that worked well with the rhubarb, itself having intensified in flavour during baking. The orange water added a gorgeous hint of sweet floral notes, working particularly well because of the sharpness of the rhubarb.

I served it warm, with a spoon of lightly whipped double cream which accentuated the tart perfectly, however it would also be good served cold with a cuppa for elevenses.