Another new book arrived a couple of days ago – India: Food and Cooking – An Evocative Culinary Journey, with 200 Recipes

I love Indian food but know very little about which types of food come from which areas in India and this book is perfect for gaining that kind of knowledge. Part 1 of Pat Chapman’s book traces the evolution of Indian cuisine and describes the culinary characteristics of the different regions; Part 2 is an in-depth coverage of the utensils, spices, herbs and other ingredients used, as well as basic recipes and preparations common to the cuisine. Finally, Part 3 contains 200 recipes taken from all the regions. The recipes consist of best-known regional dishes as well as some most modern ideas and include everything from snacks and street food to meat, fish and vegetable main courses, rice and dals, chutneys, pickles and desserts.

If I was to pick one negative point about this book, it is the lack of photographs; not essential but it’s always nice to see what your meal is going to (or should) look like. 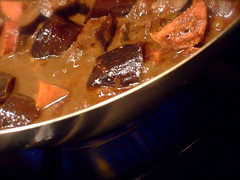 After pottering around the kitchen and searching through the vegetable basket and pantry I decided to cook Hyderabadi Spiced Aubergine (Baigan Ka Salan) for dinner last night.

It was utterly scrumptious but slightly too oily, a very easily fixed issue though so no big complaint to be made about it.

I also had some sweet potatoes lurking at the bottom of the vegetable box so decided to throw those in too.  I’m very glad I did, I think without their addition the aubergines would have made a good side dish but would have been a bit dull for a main course.

The spicing was deep and pungent yet no one flavour overtook the others.

I served it with some plain boiled rice and that was the perfect base to soak up all the rich creamy sauce.