Real Food by Nigel Slater is a wonderful book, split into chapters relating to Nigel’s favourite foods: potatoes, chicken, sausages, garlic, bread, Cheese, ice-cream and chocolate. I think I find this book so enjoyable because his favourite foods echo my ideas of food heaven too.

The book is full of glossy photo’s which are inspirational within themselves, even before reading the excellent recipes and general chatter, Nigel has an ability to make you feel he is there with you in the kitchen, which is utterly marvelous.However, despite its wonders Real Food is very rarely cooked from here, I mainly use it for ideas and comfort reading.

Tonight was the exception; I decided to cook Chicken with Roast Onion & Thyme Gravy which I served with roasted carrots, roast onions and mashed potatoes. It turned out to be a very simple but satisfying dinner. I mean after all as Nigel points out there is no better sound in the kitchen than the gentle crackle of a chicken roasting, it is so full of promise. It really is the skin that sets a good roast chicken above a mediocre one; crisp, golden and glistening, utter perfection. 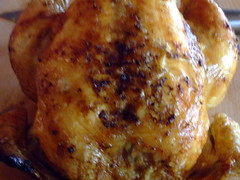 In keeping with Nigel’s recommendation I cooked mashed potato to serve with the chicken – fluffy and creamy.  I ask you could anything be more soothing? 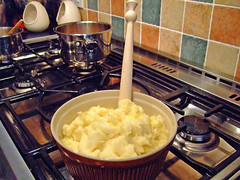 “Shakespeare is like mashed potatoes, you can never get enough of him.”

I’m not a great lover of Shakespeare to be truthful, I’d be more comfortable curled up reading the likes of James Joyce or Oscar Wilde or something more modern and contemporary entirely but I do love mashed potatoes. McCourt hit the nail on the head in the above quote – you can never get enough of them, if there’s ever any left in the pot at the end of a meal it’s a strong person who can leave them alone, unless of course, you’ve plans to turn them into some delightful leftover feast – boxty, potato bread, bubble & squeak – I could go on and on.

The carrots and onions, crisp from the oven, yet chewy because of the chicken juices that were allowed to drip onto the during the cooking process added another dimension to the meal, not entirely necessary but very nice all the same.

I’m not much of a gravy fan but this was light, fresh and tasty.