What better to go alongside a fabulous meal than some good mood enhancing music. Harem (Sarah Brigtman) really suits the mood of Middle Eastern Food. This 2003 album was Middle Eastern-themed, influenced by dance music. On Harem, Brightman collaborated with artists such as Ofra Haza and Iraqi singer Kazem al-Saher. Nigel Kennedy contributed violin tracks to the songs “Free” and “The War Is Over”, and Jaz Coleman contributed arrangements.

Another meal from the delightful Aromas of Aleppo: The Legendary Cuisine of Syrian Jews

(Poopa Dweck), Djaj Mishwi (translated into English this means Friday Night Chicken, but that doesn’t sound anywhere near as enticing does it?).

I did make some adaptations to the meal, which I’ve detailed clearly in the recipe below.  Since when didn’t I play with the recipe until I got exactly what I wanted? It’s the only way to go, after all “Cooking is not about just joining the dots, following one recipe slavishly and then moving on to the next.” (Nigella Lawson), it is about finding what works for you.Despite the lack of interest the name implies the meal was wonderful; but then again how can a well cooked roast chicken not be good? 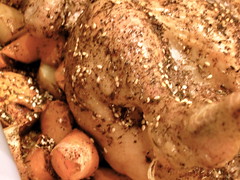 The potatoes and other vegetables in this dish are fried before they are added to the chicken. After absorbing the pan drippings, they become absolutely addictive, so much so that I was glad I cooked more than I thought I’d need – they certainly disappeared fast, no leftover veggies here tonight.

The traditional thing to do is to joint the chicken into around eight pieces once it’s cooked and to serve a chicken portion with the potatoes, but since none of us are very keen to be served meat on the bone (in fact I positively hate it) I just carved the meat off the bone and served that way, which worked well although it wasn’t quite as attractive in the presentation stakes.

With the left over chicken I am going to make a tagine tomorrow using this recipe.