Apart from Saint Valentine’s day (14th February) being associated with cards, present giving and general romance, what do we really know about the Saint?
The origin of St. Valentine, and how many St. Valentines there were, remains a mystery. Although the most common, and scholarly accepted view is that he was a priest in Rome, jailed for defiance during the reign of Claudius II.
Valentine was jailed for conducting illegitimate wedding ceremonies in the capital. Emperor Claudius claimed that married men made poor soldiers and consequently decreed that all marriages of younger citizens would be outlawed. Bishop Valentine, however, maintained that marriage was part of God’s plan and purpose for the world. He continued to conduct marriages in secret between young people, sometimes as young as twelve, in the name of love.
During his prison stay it is claimed that as well as restoring the site of one of his jailers daughters that he penned a note to her and signed it ‘from your Valentine’.  This is where the custom of sending Valentine cards originates; now an estimated one billion cards are sent each year worldwide in this tradition.
It is claimed Valentine was martyred in 269AD by beheading and is buried on the Flaminian Way in Rome.
The date February 14th is most likely not related to Saint Valentine at all but because it is midway through a time of theyear that is historically associated with love and fertility.
It encompasses the sacred marriage of Zeus and Hera in Ancient Athens and the Ancient Roman festival of Lupercus, the god of fertility. The priests of Lupercus would perform a traditional purification ritual, slaughtering goats to the god, and after consuming wine, they would run through the streets of Rome holding aloft the skins of the goats touching anyone they met. The occasion compelled floods of young women to the streets in the belief that being touched would improve their chances of conceiving and bring forth easy childbirth. I wonder if this is where the tradition for red items such as hearts and roses comes from?
So to the end of the history lesson and back to food & cookery.
Having received another challenge from Violets Pantry to cook “anything to do with love”, I began to think about traditional food items related to this.  I really didn’t want to go down the chocolate route or heart shaped biscuits etc.  I wanted to find something that had a real meaning. 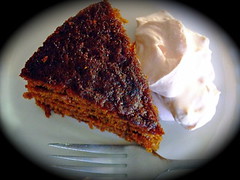 After much deliberation I decided upon a honey cake.  Why?  Well because honey is a food of love, seen by the Greek and Roman population to bring luck and good fortune.  Traditionally brides and grooms drank honey-wine (mead) on their wedding day before setting out to live together – hence our modern day word honeymoon, signifying the holiday the married couple take, traditionally before moving into their new home.
I chose to bake Jana Gur’s Magical Honey Cake from The Book of New Israeli Food a Culinary Journey. It was the name that instantly attracted me, sure, isn’t romance and love magical?  The cake really is stunning and magical indeed, very moist but with a crumbly texture, deep in flavour and oh so moreish, what more do you want from a cake? Nothing, that’s what.  Served with a malabi syrup folded into thick double cream it was absolutely sensational.