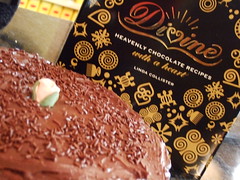 I must begin by saying a massive thank you to Tina, a forum friend of mine for sending me the wonderful book Divine Heavenly Chocolate Recipes with a Heart

Divine Heavenly Chocolate Recipes with a Heart is a celebration of ethical chocolate – Fairtrade chocolate produced by the Divine Chocolate Company.  Fairtrade is something I am passionate about, believing that we all have a duty to each other to have a social conscience.

The four main standards that producers must abide to in order to have ‘Fairtrade’ products are:

More information on fairtrade can be found here.

The book is split into various chapters including, cakes, savory, drinks, desserts etc but one of the most interesting elements it is the introductory chapter discussing how and where Divine chocolate is produced.

What better way to say thank you than cooking from the book?  That is exactly what I did, albeit in an adapted version.  I decided to bake the “Old-Fashioned Chocolate Buttermilk Pound Cake” with a couple of alterations. Why? Well simply because I had a carton of buttermilk lurking in the fridge and the idea of simple cake which could be decorated any which way I wanted was certainly appealing.

As Collister states the buttermilk leads to a moist crumb and gives a slight tang to the cake.  I worked on this by adding a sour cream chocolate ganache topping and instead of baking the cake in one 23cm spring-clip tin as directed I baked it in two 20cm sandwich tins, layering them with a little of the ganache and homemade cranberry preserve.  Although cranberries are more usually associated with white chocolate, their slight sharpness and shimmering ruby colour really lends itself to the bitterness of dark chocolate. 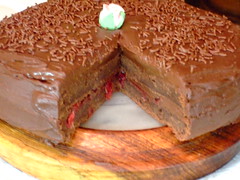 I then scattered the top of the cake with chocolate sprinkles, which were sent to me by my friend Het in The Netherlends. I assumed they were a cake topping, I was rather mistaken though as apparently they are normally used as a sandwhich filling – cake topping suits them well though and placed a sugarpaste rose in the centre to offset the finished cake. 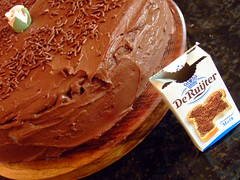