For some reason Nigella's cream cheese brownies (How to Be a Domestic Goddess: Baking and the Art of Comfort Cooking

) seem to have a very poor review, fellow bloggers just do not seem to find them at all favourable.  Other cream cheese brownies are raved about, so why not these?  I decided I had to put them to the test.

Along with many of my forum friends I am passionate about brownies and I always on the lookout for a new recipe to try. The fact that this particular recipe for the cream cheese variety had so many poor reviews just spurred me on. The combination of sweet and savory in a brownie – it was either going to be fabulous or totally disgusting, but I have to admit I trust Nigella’s judgement and jumped (metaphorically speaking of course) straight into the recipe with both feet.

I’m so glad I did, I couldn’t find a fault with them, other than they took around 15 minutes longer to cook than the recipe stated, but that’s not exactly a terrible hardship.

Believe me I’ve made many a tray of brownies but, these were the quickest to disappear off the cake stand.

I used Mascarpone instead of Philadelphia as that was the only soft cheese I had in the house.  I don’t know if that made them any better or not, but I do know it added a slight saltiness which brought out the deep flavour of the chocolate.

I often find that brownies are so sweet they become sickly, certainly not the case here. I’m still trying to decide if that’s a good or bad thing, well I suppose it’s good for my taste-buds but not so good for my waistline. 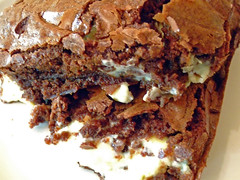 The photo might not be too great, in fact, it’s rather deceptive and misleading, as the brownies were gorgeous, moist, chewy morsels.