Can it ever be too cold to eat ice cream?  As popular foodie debates go that has to be a pretty highly rated question.  I would (and often do) argue that the answer is a definitive no, sometimes only a bowl of ice cream will do, and homemade is always that notch above.

So yesterday, despite the gloomy wet weather, I set about making ice cream.  Creamy Cinnamon Ice Cream to be exact, which I served with a warm toffee sauce.  The combination of hot sauce on ice cream is not something I’ve experimented with much at home but after reading Ice Cream Ireland I wanted too and I wanted too right away.  I wasn’t in the slightest bit disappointed.  The combination was delightful and will be recreated many times.  I think its main reason for success was the way the hot and cold combined to give an ethereal sensation in the mouth, it certainly got the taste buds going. 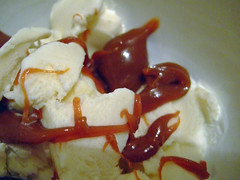 The toffee sauce was really a bit of a cheat – just some dulce de leche heated through with a couple of tablespoons of double cream to loosen it.