I just love a good Chilli Con Carne but I’ve tried so many disappointing recipes that I thought I’d pretty much given up on eating this as a regular meal. Inspiration came on Friday night, why not just make something up as I went along? Did I really need a recipe to follow? Not really, I mean I create enough recipes of my own, so why should this be any different?

For those of you unfamiliar with this meal, it is simply a spicy stew with origins in Mexico, however it is the official dish of the US State of Texas! A very interesting history of the dish can be found here.

My preference is for chilli with rice but alas that would mean I had to create a separate side dish for my rice hating mother and I didn’t want the hassle to be honest with you. In the end I decided on crisp shell tacos, I mean everyone loves a good taco don’t they, or at least my household does. I used bought taco shells as I’ve never come across a recipe for them, if any of you know of a good one please do leave me a comment about it! I’d love to make them someday.

I also served plenty of green salad, sliced avocado, sour cream and Monterey Jack Cheese. I love Monterey Jack cheese, maybe, it’s because it reminds me so much of my holidays to America, and when I saw some on my local butchers cheese counter I just had to buy some for use in this dinner. You might be wondering why I served slice avocados instead of the more traditional guacamole; it’s not that I don’t enjoy guacamole it’s just I love plain avocado and as I don’t get them very often in my vegetable box I want to make the most of them. Despite being high in fat, avocados have actually been proven to lower cholesterol, how good is that! What a super-food. The sour cream, well that’s obvious isn’t it? You can’t have chilli without sour cream!

I decided to, surprisingly, not add chillies or chilli powder to the dinner but chipotle paste instead, chipotles are smoke-dried jalapeno peppers popular in Mexican cooking. The paste I used was a delicious blend of Chipotle peppers, onion and tomato and it added a lovely hot, smoky flavour which wasn’t too overpowering but very pronounced all the same. Much better than standard chilli powder. I also added a small amount of cumin and coriander which gives the sauce a warmth and depth of flavour.

The addition of cocoa and chocolate might seem strange but it is actually a very traditional thing to do. The cocoa adds richness, a bitter edge and a lovely deeper colour too.

You can prepare the dish in under an hour if you’re really time pressured but the longer the chilli can simmer the better, allowing for enhanced flavour and super tender meat. As in all cases buy the best meat you can, I don’t mean expensive cuts, but meat sourced well and preferably from a butcher rather than the pre-pack stuff. 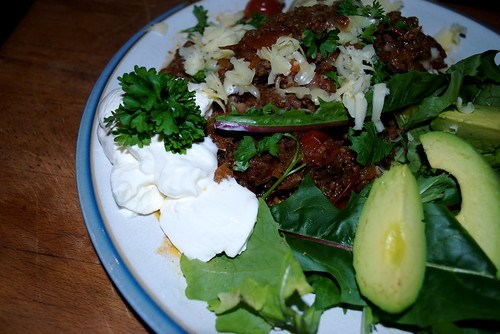