March 20th marked the first day of springtime but until yesterday the whether hasn’t been at all clement and so I haven’t really felt like cooking springtime food, preferring to stick to warming, comforting dishes instead. However, with the arrival of some warm sun yesterday (I’d like to add here that it disappeared today and gave way to more rain) I decided to cook a meal for spring. As it is almost nearly Easter I wanted the meal to special for that too and vegetarian also – lasagne primaverili seemed perfect. Primaverili is the plural form of primaverile which means springlike or vernal in Italian.

The recipe came from an Italian cookbook Sfida al Mattarello by Sorelle Simili, a gift from my very generous Italian friend Carla. 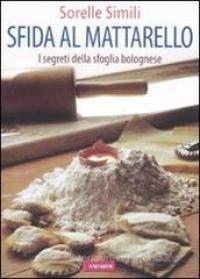 Deep in a courtyard off the Via San Felice, Margherita and Valeria Simili do what they have been doing all their lives – they cook and bake. As girls, helping out in the family bakery, they made bread, pasta and cakes for their customers; later, they cooked for their families and for the last 13 years, they have run a little cooking school, founded with the help of Marcella Hazan, one of their biggest fans, theirs is one of Bologona’s most valuable hidden assets. With a glorious sounding cooking school like that and reportedly fabulous food markets it is no wonder that Bologna is known as a city that lives on its stomach.

Bologna is often described as being “Bologna la dotta, la grassa, la rossa” (Bologna the fat, learned and red city)It is one of the cultural capitals of Europe, with its prestigious university founded in 1088, which today offers 250 different majors to more than 100,000 students. Its character is expressed in the red of its buildings and the long, long porticoes which are everywhere (almost 40 km). Red is also the color of its local government which from the end of WWII until the present have contributed to making the city famous for its openness and tolerance. The ‘fat’ comes from the way food is viewed, live to eat and not the other way around; if I were to eat all the delicacies described in the Simili sisters books I’d be rather fat I’m sure.

After nearly two hours spent with notepad, pen and Italian dictionary by my side I began cooking and all I could think was “It’d better be amazing after all this effort” and it was. Molto bene! Very good indeed!

The lasagne is based around two sauces, a highly seasoned, slightly cheesy béchamel and a spinach and cheese sauce. I didn’t have the recommended 500g of spinach so I made up the weight difference using watercress. The peppery note of the watercress worked really well against the creamy sweet bechamel. I also added a little wild garlic too, how could I not when 2kg of it arrived in my organic delivery today?

The only unfortunate point is that I couldn’t get hold of the specified cheese with walnuts, Carla says this cheese is lovely and oh how I wish I’d been able to locate some but alas I couldn’t and so substituted a firm home-made ricotta instead. It worked well but not so well as I imagine the nutty cheese would have done.

I won’t bore you all again by writing at length about the history of lasagne and the qualities of a good one, if you want to read more do look here – where I made a lasagne for the Daring Bakers Challenge last month.

Even before baking it looked delicious and the smell emanating from the oven filled the house with a glorious and mouth-watering scent, oh how I longed for it to cook. 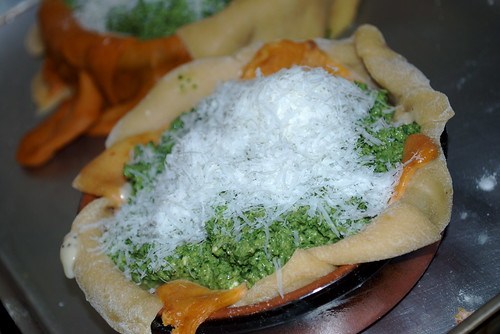 I wasn’t disappointed in the least, with a bubbling cheese top and lovely crisp edged pasta what more could a girl want? Oh ok then just a sprig of basil to fancy it up a little and some crusty bread to eat alongside and use to mop up the sauces. The bread wasn’t Italian but it was still utterly delicious, light and airy but with a super crisp shell.  The recipe was one of Daniel Leaders and it was for Parisian Everyday Bread (although I shaped it into petit pain rather than baguettes). 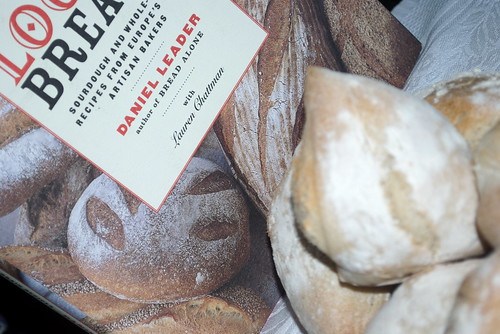 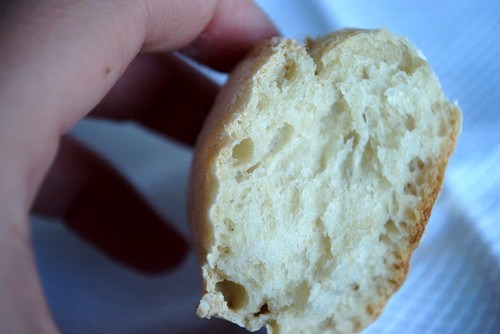 As per usual the rolls have been entered to YeastSpotting which this week is being hosted by Zorra instead of Susan.

On a side note as much as I loved the lasagne I think it would be best served as a starter as it is so rich, I’d follow it up with a simple char-grilled steak I think. 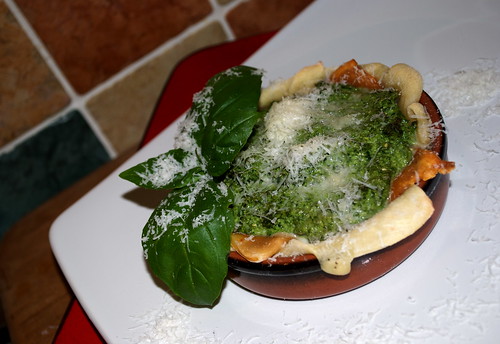 Will I make this again? Oh yes but not all the components in one day, it’d be more effective to make the sauces and fillings the day before and do the pasta and assembly on the day; I don’t mean it’d be better for the food but better for my stress levels. I like pressure but translating, shopping, preparing and cooking in the same day was too much, even for me; what I need now is a large glass of white wine, prosecco would suit me well.