Fish and Chips have to be one of the most well loved dishes (and one of the most famous) of the British Isles. After tasting a well made portion you’d be hard pressed to argue against their goodness I’m sure.

This classic English dish came from a tradition of street food that was already growing in the 19th century with the hot-pie shops of Victorian England. Fried fish got a mention by Charles Dickens in Oliver Twist (Penguin Classics)

(published in 1837), though it was then typically sold with either a cut of bread or a baked potato.

The birthplace of fish and chips is unidentifiable: Lancashire, London and Dundee have all put forward a claim. The combination of fresh fish and a hungry working class makes it likely that the dish developed in the northern ports. In the south, the combination of fish and potatoes could well have been forged in the East End of London, where the close confines of the tenements meant the fried-fish tradition of Jewish immigrants would have come into contact with the potato-based diet of the Irish.

Sure we’ve all got our opinions of what fish and chips should be like, fat or thin chips, sauce or no sauce and for that matter what kind? It all makes the dish. For me UK fish and chips need to be doused in Sarsons malt vinegar and plenty of salt, no sauce, happen maybe only a small portion of mushy peas at a push, to complete the dish you need a steaming pot of tea and a couple of thick cuts of buttered (salted is a must) bread.

This meal holds such fond childhood memories for me, when I lived in Yorkshire we’d have them most Friday nights but since moving to Staffordshire the opportunity for them has dwindled, I’m sorry to say but I’ve yet to find a decent fish & chip shop locally. So either I wait until I go visiting relatives back in Yorkshire for a lunch of fish and chips, see below photo, or I have to cook my own. 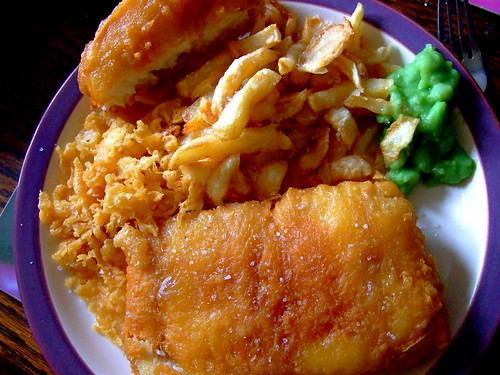 After saying all that I have to confess that the best fish and chips I’ve ever eaten were from Leo Burdock’s in Dublin. Established in 1913, this quintessential Irish take-away shop across from Christ Church Cathedral is a cherished Dublin institution. Cabinet ministers, university students, and Hollywood stars alike (Tom Cruise and Liam Neeson are reportedly both fans) can be found at the counter waiting for fish bought fresh that morning and good Irish potatoes, both cooked in dripping. There is no seating but I can speak from experience in telling you that after a couple of glasses of the black stuff (Guinness) a wander up Dame Street past Dublin Castle and down Werburgh Street has to be most necessary, rounding the night off with these delights is an experience you must have at least once in lifetime. Whether it’s the experience or the use of dripping that makes all the difference is something I can’t say but it does influence me in that I only ever use beef dripping to fry my fish at home now.

Since I got my Magimix deep fryer I’ve been able to easily attempt fried fish at home but alas I’d yet to find a recipe that left me with a satisfaction that my meal was authentic and even indeed particularly tasty; I suppose you could say I was in search of perfection. Perfection I found last Friday (Good Friday), fish of course being the traditional food of choice; the recipe came by way of Heston Blumenthal’s In Search of Perfection

which is an absolute marvel of a book. I just had to get myself a copy after getting The Big Fat Duck Cookbook

by Blumenthal for my birthday, he’s such an inspirational chef and writer.

Heston does say that he prefers not to be using deep fryers for fish as they struggle to maintain a hot enough temperature, but to save the mess and tidying up I decided to go ahead and use mine, I came across no problems but I suspect it depends how high your temperature control will go. 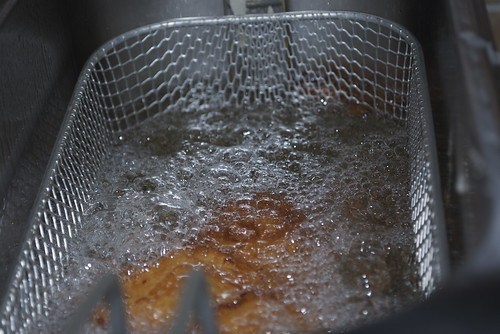 No matter how good your fish, it can be ruined by bad batter. Batter has to insulate the fish from the high heat of the fryer and also turn a crunchy, crusty brown in the time it takes for the fish to cook, without going soggy on serving either.  The trick according to Blumenthal is to use vodka in the batter, I have to confess I was a little concerned about 300ml of vodka going into the batter but I tried it out anyway and it was stunning, crisp and crunchy, just perfect. Now here’s the science: vodka is more volatile than water, so it evaporates much more quickly. It has the added benefit of not developing the gluten in the flour the way water does, which means you get a crisper crust. The use of larger enhances this further by introducing air bubbles to the batter. The ultimate enhancement would be to use a soda siphon to pump the batter out, thus giving even more air to the dish, but like most home kitchens I guess, I just didn’t have one to hand; instead I gave the batter a really good whisk in the kitchen aid for about 20 seconds before I dipped the fish fillets. 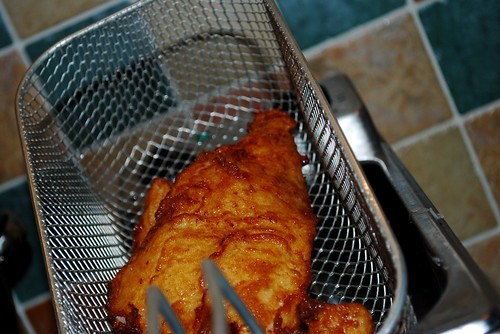 Typically fish and chips here are either made with cod or haddock, I went for haddock as I’d a piece in the freezer. Please I urge you do check that the fish you buy is from a sustainable source.

I cooked my chips in my actifry simply to make the whole process easier and less time consuming.