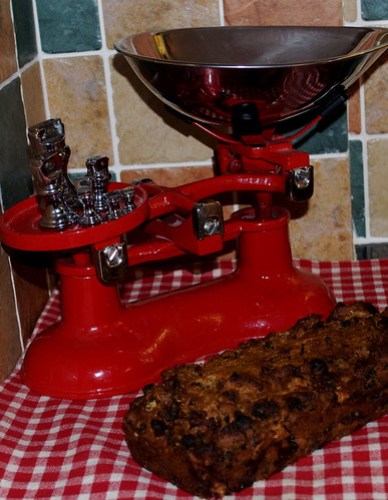 The above cake is a boiled fruit cake, now commonly known as Jessie Tweedle’s Tea Loaf  Now all I know is that Jessie Tweedle was a woman known to the lovely Brenda’s mother, and that she gave her the recipe for the above boiled fruit loaf.

Apparently Brenda’s mother was always saying “You’ll be having a piece of Jessie Tweddles tea loaf” if anyone came round visiting; the cake is so good I can see why she always had a loaf on hand and I reckon I’ll be saying something very similar from now on.

Now, don’t be fooled into thinking the name tea loaf is because it’s a cake to drink with tea, it is of course good with a cup of tea, but the cake actually contains tea. Quite a common practice in Irish cakes and breads, not unsurprising though considering the Irish have the highest per capita consumption of tea in the world, averaging six cups per day; now that’s a massive 3.2kg in a year!

Ireland’s close ties to tea have their roots in the country’s history as a part of the British Empire. When it was first imported to Ireland in 1835 it was quite expensive and only within the reach of the most affluent. Eventually the price came down, though, and the drink’s popularity spread. Tea houses opened around Ireland and loose tea was sold in local grocery stores as it became the fashionable drink for all occasions.

Irish companies continued to purchase most of their tea through British suppliers until the time of World War II. At the outbreak of the war the British rationed tea to all hands based on purchase rates prior to the outbreak of the war. When Ireland declared neutrality, however, the British retaliated by reducing their rations almost entirely. The Irish government responded by establishing a private company, Tea Importers (Eire) Ltd. to act as an importer but had initial difficulties because there was not native Irish merchant fleet.

After the War, legislation was passed that required Irish tea companies to import tea directly from the country of origin. Never again would Ireland be dependent on another power for their tea supply! In 1958 the Tea Act was passed, establishing Tea Importers (1958) Ltd. as the only authorized importer of tea into the Republic of Ireland. Fifty individual companies active in the tea industry collectively owned this importer/wholesaler. Its monopoly continued until Ireland’s 1973 entrance into the European Economic Community (EEC) which disallowed such monopolistic organizations.

Before World War II most tea was sold in loose form rather than in packets or bags. Shops, such as Barry’s grocery store in Cork which originally sold tea as just part of their line of products, often made their own blends. “Branded” tea was not common outside local areas. One reason for the lag in the acceptance of tea bags was that in their early years the blends they contained were generally of a lower quality than those sold as loose tea. Innovation by J. Lyons & Co. (Ireland) Ltd. in improving the bags’ quality led to an increase in their popularity.

Making a perfect cup of tea is quite an art, I can’t abide tea made in a cup, I need the use of a teapot but I’m not so particular that it has to be porcelain. Here are my top tips:

I do now tend to drink whatever FairTrade tea I can find at my local stores but for an ultimate treat I love Bewley’s tea most (especially if served out of my Bewley’s mug). Bewley’s is certainly a Dublin institution and is the first place I head for a taste of the city whenever I get the chance to visit.

So back to the cake, boiled fruit cakes were very common (and to a certain extent still are) throughout Ireland, they’re dense, hearty cakes which are rather filling.  It is a fairly common practice to serve slices of them with salted butter, a perfect mid morning snack (or even breakfast) especially when served alongside that perfect cup of tea. 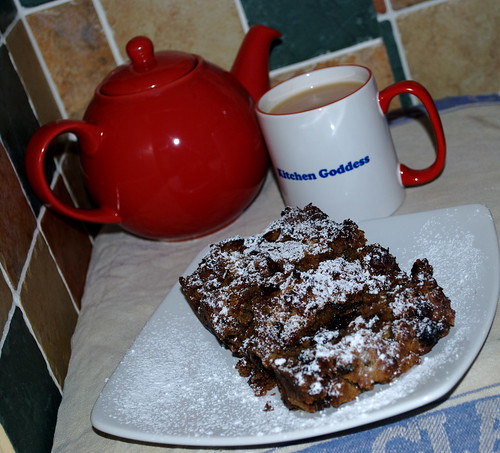 Cakes such as this are sometimes referred to as Tea Brack’s (or in Irish Tae Breac), the differential although minor is that cakes often contain nuts and glace cherries whereas bracks contain only dried fruits – so in that sense you can make yourself either a cake or a brack depending how the mood takes you. Breac means dirty or speckled and is generally thought to come from the cakes rather speckled appearance because of the fruit content.

Jessie Tweedle’s cake in particular has a superb moistness and a delicacy to it also, lovely and filling but not so that it stops you reaching for that second, greedy slice. A big thank you to Brenda, and to Mrs Tweedle herself, for what a great recipe this is.

Do take the time to visit Brenda’s blog even if you don’t much fancy the idea of Jessie T’s cake (although how could you not) as she has the most amazing site, really it is fabulous.