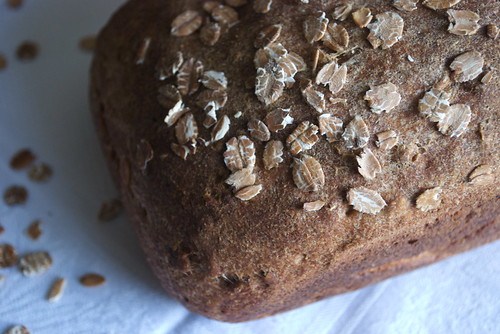 What better than a loaf of freshly baked bread to go with the delightful dish of home made butter.

I was going to make a simple no knead loaf with white spelt flour, one I have made many times before with great success but when I got to the cupboard I found it was lacking in flour! Shock horror, what should I do? I hadn’t the time or motivation to go shopping and besides I’d struggle to get spelt flour locally anyway; an Internet shop with Shipton Mill is overdue I feel.

So back to the bread. Remembering the oak smoked flour I used recently I thought I’d put that to good use. Combining this smokey deep flour with a dark rye flour (type 1350) was my plan; hoping it would give me a relatively light but dense bread suited to eating with my goats cheese salad later that night; in effect my night-shift midnight treat; sure don’t all night workers need that little treat to keep them going when the rest of the world is fast asleep in their bed?

Rye (secale cereale) is a grass grown extensively as a grain and forage crop. It is a member of the wheat tribe (Triticeae) and is closely related to barley and wheat. Rye grain is used for flour, rye bread, rye beer, some whiskies, some vodkas, and animal fodder. It can also be eaten whole, either as boiled rye berries, or by being rolled, similar to rolled oats.

While rye and wheat are genetically close enough to interbreed (the resulting hybrids are known as triticale), there are some substantial differences in the biochemistry of wheat and rye that can drastically affect the bread making process. A key issue is amylase – while wheat amylase are generally not heat-stable and have no effect on the stronger wheat gluten, rye amylase remains active at substantially higher temperatures. Since rye gluten is not particularly strong, the main structure of the bread is based on complex polysaccharides, including rye starch and pentosans, and the amylase in the flour can break down the resulting structure, inhibiting the rise of the dough. There are two main ways to combat this – the traditional manner, acidification, uses Lactobacillus cultures in a naturally derived sourdough starter to inactivate the rye amylase, which cannot function in an acidic environment, and to help gelatinize the starches in the dough matrix; the second method is to use conventional yeast and combine the rye flour with another more stable wheat flour (as I chose to do here).

For added texture and nuttiness I topped the loaf with spelt flakes prior to baking. Just remember to brush the loaf with a little oil or water to help the flakes stick.

I had a great success on my hands, a deep, dark, crunchy ‘skinned’ loaf with a fabulously soft and chewy centre. The flavours of the two flours worked so well together, the wheat flour lending a smokey richness and the rye a deep colur and slightly fermented taste, a similar taste to a sourdough infact; earthy and strong but not too overpowering. Even my Dad who’s not a lover of rye breads really enjoyed this bread; and how could he not with it slathered in the home made creamy butter?

My recipe is based on one for the German bread Hunsrucker Bauerenbrot which I originally read about in the Mixer Cookbook sent on purchase of my KitchenAid.