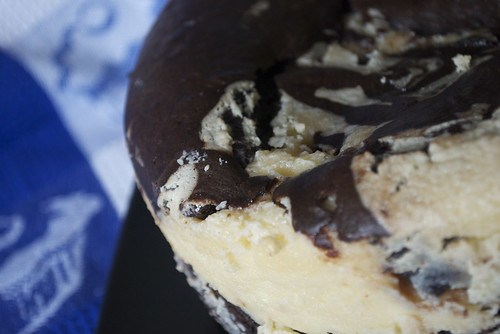 While studying for A Level Psychology I learnt an awful lot about the impact names can have – the link to assumed personalities, stereotyping and even the impact it can have on obtaining a place in a chosen career or political election – but never did I think to link this psychology to the naming of foods and food products; or at least I didn’t until I began discussing my latest bake (black bottom cake) adapted from The Hummingbird Bakery Cookbook

by Tarek Malouf, over on Violets Pantry the other day.

I was greeted (albeit in a jovial way) with comment such as these:

Did you burn it?

I’m familiar with black bottom cakes, like when they’re over cooked!

Not a very appealing name is it, wouldn’t inspire me at all.

Which got me thinking, how on earth did such a delectable cake end up with such a title? Sure wouldn’t something like black & cream layer cake or marbled chocolate sponge sound better? Oh well it’s not my place to go changing their name now is it? They’ve been around an awfully long time and from what I can gather are rather an American institution by now.

I decided to make one large cake rather than cupcakes though because this beauty was going to be my Mums birthday cake, typically for her she requested that there be no frosting on the cake, so that part of the recipe got omitted. Should the cake have been for me or just as a general bake the frosting would of course have been included but for a special request how could I not fulfil it?

Tarek says the cake(s) look innocent but packs a punch and he’s certainly not wrong; it is utterly sinful. So good but you can just feel your waistline expanding as you eat, not always a bad thing and for special occasions the calories don’t count do they?

Delectably moist chocolate sponge with a creamy, unctuous cream cheese (cheesecake) filling is such a marvellous combination, and perfect for anytime of day. It makes a great dessert, a little extra pouring cream and some fresh berries would work well here, but is equally good with a coffee during the day; I’d even eat it for breakfast but maybe that’s just me.

The chocolate sponge mixture differs from most standard cake batters in that it contains no eggs or butter, using sunflower oil for the fat content instead, this leads to it being slightly crumblier, less sweet and denser. The perfect backdrop to the sweet, creamy filling which stayed incredibly light and didn’t dry out at all during the cooking process; something I was slightly concerned about due to my decision to bake the cake whole – instead of taking the specified 20 minutes (for the cupcakes) I ended up cooking the cake for around 40 minutes, by that point the cake still had a very slight wobble and I was in two minds whether to cook for longer or just leave the cake to cool and cross my fingers; I crossed my fingers and it worked!

For added indulgence instead of using regular chocolate chips to fold into the cream cheese mix I used roughly chopped chunks of Maya Gold chocolate which is headily scented with notes of orange, cinnamon, nutmeg and just the faintest hint of vanilla.

That married with the use of home made vanilla extract worked like a match made in heaven.

Do not let the name put you off baking this! Give it another name, give it no name, I don’t care, just bake it!