So here I am once again, writing about another Daring Bakers expedition. This month we had a challenge indeed – strudel. Now I’ve never made a strudel before so it was both rather challenging and rather fun too, although I did run into a major problem along the way – lack of work-top space – but more about that later.

The May Daring Bakers’ challenge was hosted by Linda of make life sweeter! and Courtney of Coco Cooks. They chose Apple Strudel from the recipe book Kaffeehaus: Exquisite Desserts from the Classic Cafés of Vienna, Budapest and Prague by Rick Rodgers.

A strudel is a type of sweet layered pastry with a filling inside, that became well known and gained popularity in the 18th century through the Habsburg Empire. Strudels are most frequently associated with Austrian cuisine, but they are also a traditional pastry in the whole area formerly belonging to the Austro-Hungarian empire. The oldest Strudel recipe is from 1696, a handwritten recipe at the Viennese City Library, Wiener Stadtbibliothek. The pastry has its origins in the similar Byzantine Empire or Middle Eastern pastries.

The challenge involved making a traditional Strudel pastry dough, which is made from flour with a high gluten content, egg, water and butter with no sugar added. A legend has it that the Austrian Emperor’s perfectionist cook decreed that it should be possible to read a love letter through it. Now I managed to get my pastry thin, very thin in fact but not so thin that I could read through it. Herein lay the problem; I didn’t have quite enough work surface to roll the dough to the specified dimensions, so it ended up a wee bit smaller than desired. How on earth did the Daring Bakers with small apartment kitchens manage this task??? 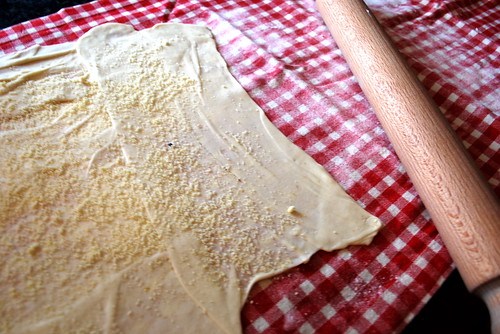 We had free reign with the filling idea (but the pastry had to be made to the letter) and my original plan was to go down the ultra traditional apple strudel route but the arrival of a great bunch of rhubarb in my vegetable box delivery put that idea out of the frame, I just had to use the gorgeous rhubarb didn’t I? 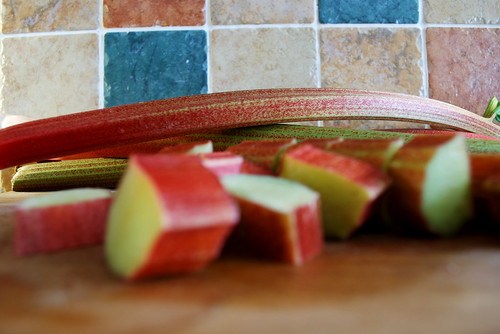 I didn’t do anything too exciting with the rhubarb, just allowed it to stew down to a chunky consistancy in a couple of tablespoons of water and about 1/2 cup of castor sugar.

Rhubarb seems to be very popular at the current time but this hasn’t always been the case. Rhubarb root has been used as a laxative in China since at least 2700 BC. The dried roots were first brought to Europe by Marco Polo. By the sixteenth century the dried root had also acquired a reputation as a cure for venereal disease and trade flourished. It was not until the eighteenth century that the stalks became popular for eating in Europe. The process of forcing is said to have been discovered at the Chelsea Physic Garden and by 1830 forced stalks were common on London markets.

Rhubarb was popular with the Victorians and through most of the twentieth century but suffered along with many of our home grown, traditional vegetables with the emergence of supermarkets and the associated globally traded, seasonless fruit that they have promoted over the last 30 years. Apart from domestic gardens, commercial production of rhubarb had largely retreated to the stronghold of Yorkshire (and the rhubarb triangle) until a revival started with the turn of the century.

Instead of sprinkling the pastry with bread-crumbs before spreading on the filling I decided to use ground almonds, simply because I didn’t have bread-crumbs to hand. The almonds served their purpose well as only a small amount of liquid leaked from the strudel on baking.

I expected the rolling and moving of the dough to be difficult but it was in fact no harder than rolling a Swiss roll say, a rather easy job, although my end product did look more like a crab than a strudel. 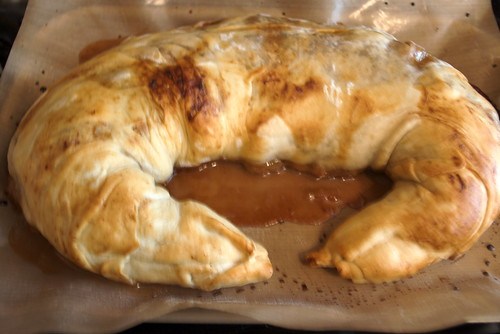 With the juices left from stewing the rhubarb for the filling I made a sauce to serve alongside the strudel. To do this I added about 100ml of cream to the juices and reduced it down over a medium heat, until a thick pouring consistency was achieved, a couple of tablespoons of icing sugar were also added to boost the sweetness as the filling was quite tart. 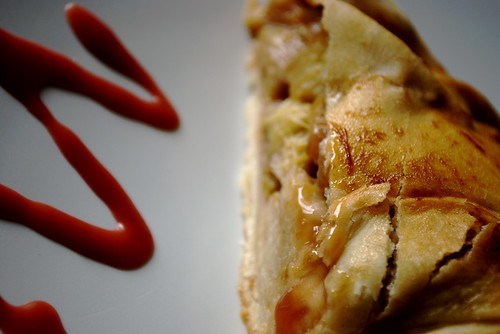 As much as we all enjoyed the strudel I won’t be in a hurry to make it again. I just didn’t feel the effort justified the end results, my taste-buds were not a jangling with this one. I’m sorry guys!