The June Daring Bakers’ challenge was hosted by Jasmine of Confessions of a Cardamom Addict and Annemarie of Ambrosia and Nectar. They chose a Traditional (UK) Bakewell Tart… er… pudding that was inspired by a rich baking history dating back to the 1800’s in England.

Bakewell tarts…er…puddings combine a number of dessert elements but still let you show off your area’s seasonal fruits.

Like many regional dishes there’s no “one way” to make a Bakewell Tart…er…Pudding, but most of today’s versions fall within one of two types. The first is the “pudding” where a layer of jam is covered by an almondy pastry cream and baked in puff pastry. The second is the “tart” where a rich shortcrust pastry holds jam and an almondy sponge cake-like filling.

The version we’re daring you to make is a combination of the two: a sweet almond-flavoured shortcrust pastry, frangipane and jam. 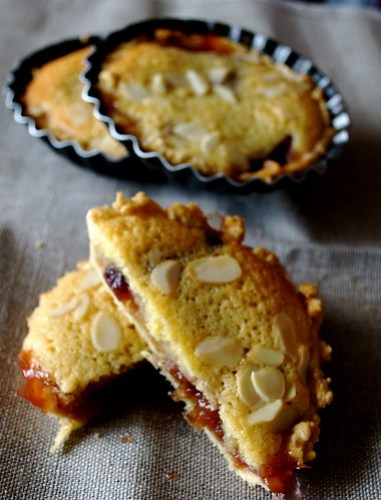 So here we have it – the chance to get creative with a Bakewell Tart. I’m so glad though that we didn’t have to recreate the so often seen mass produced horror of a Bakewell like these (sorry Mr Kipling). If we had, I might have had to abstain from the challenge in protest.

There can’t be many dishes as controversial as the Bakewell tart. For starters, there seems to be no kind of consensus on its name. We might call them tarts now, but in Bakewell itself, they’re puddings – as they were generally known for hundreds of years. Personally I think of them as a tart but whatever you wish to name them, they are a true delight.

I only live a relatively short drive from Bakewell but this was the first time I’d actually made the infamous tart, err, pudding.

Like many regional dishes there’s no “one way” to make a Bakewell Tart, but most of today’s versions fall within one of two types. The first is the “pudding” where a layer of jam is covered by an almondy pastry cream and baked in puff pastry. The second is the “tart” where a rich shortcrust pastry holds jam and an almondy sponge cake-like filling. The version we were dared to make was a combination of the two: a sweet almond-flavoured shortcrust pastry, frangipane and jam. The only key components were we make the pastry and frangipane to the letter, the jam/filling was up to us and we could make whatever size tarts we wished.

Flan-like desserts that combine either sweet egg custard over candied fruit or feature spiced ground almonds in a pastry shell have Mediaeval roots. The term “Bakewell pudding” was first penned in 1826 by Meg Dods; 20 years later Eliza Acton published a recipe that featured a baked rich egg custard overtop 2cm of jam and noted, the pudding is famous not only in Derbyshire, but in several UK northern counties where it is usually served on all holiday occasions.

By the latter half of the 1800s, the egg custard evolved into a frangipane-like filling; since then the quantity of jam decreased while the almond filling increased.

This tart, like many of the world’s great foods has its own mythic beginnings…or several mythic beginnings. Legend has it in 1820 (or was it in the 1860s?) Mrs. Greaves, landlady of The White Horse Inn in Bakewell, Derbyshire, asked her cook to produce a pudding for her guests. Either her instructions could have been clearer or he should have paid better attention to what she said because what he made was not what she asked for. The cook spread the jam on top of the frangipane mixture rather than the other way around. Or maybe instead of a sweet rich shortcrust pastry case to hold the jam for a strawberry tart, he made a regular pastry and mixed the eggs and sugar separately and poured that over the jam—it depends upon which legend you follow.

Regardless of what the venerable Mrs. Greaves’ cook did or didn’t do, lore has it that her guests loved it and an ensuing pastry-clad industry was born. The town of Bakewell has since played host to many a sweet tooth in hopes of tasting the tart in its natural setting.

Despite never having made a Bakewell Tart before I wasn’t daunted by the challenge, unlike many I love making pastry, I conquered my fear of preserves a long while back and have made frangipane several times before (just do a quick search in the side bar if you want to read some of my earlier posts about these topics).

I went for a rhubarb and vanilla jam filling and made both some mini tarts and a rather huge tart too.

To the boiling jam I added about a couple of tablespoons of hibiscus flowers, not for flavour really but to enhance the vivid pinkness of the gorgeous rhubarb.  That’s the pity with rhubarb, on cooking it can look a bit pallid and that just won’t do. 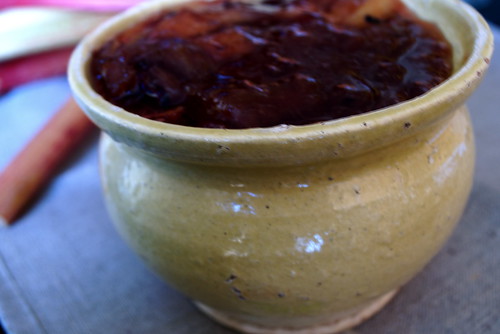 I ended up with a sweet and sticky jam that was still well textured, achieved by cutting the rhubarb into various lengths instead of the uniform chunks specified and not mashing it all to a pulp.  If the jam was going to be for spreading on toast at breakfast I’d probably have gone for a smoother finish but in a rustic pudding like this I believe texture to be nothing but a good thing. 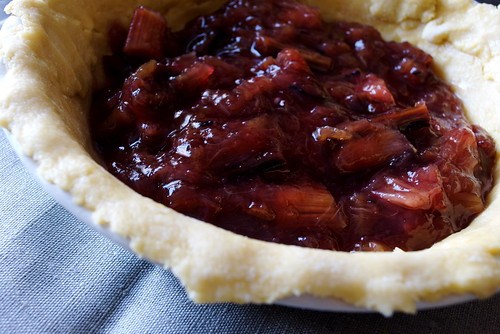 Even before baking the pudding looked inviting, once covered with the pale golden frangipane. 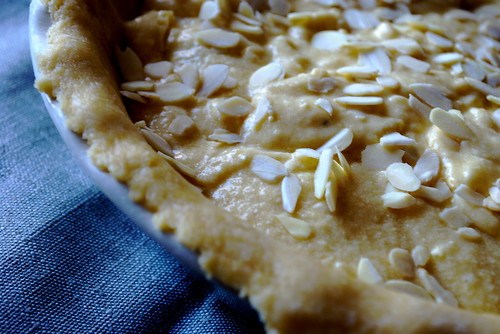 We happily munched the mini tarts with a cup of tea but the large version was served in slices with hot creamy custard – not ideal considering we are now entering the season of summer warmth, but hey ho in the interests of all that is foodie what else could I do? 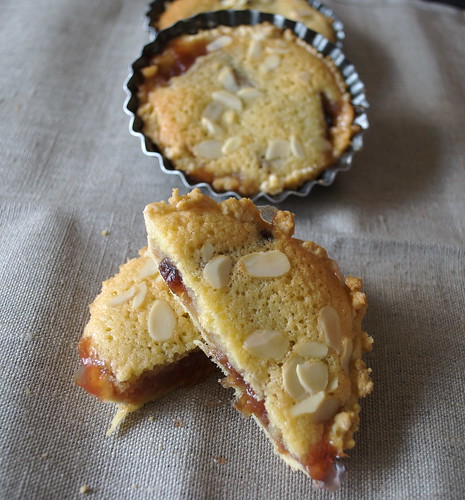