Yesterday I achieved a culinary first for me – I made a clafoutis. It’s not that they’re difficult to make or incredibly complicated with numerous steps to a multiple page method, just that I don’t really do ‘eggy puddings’ and that is essentially what a clafoutis always seemed to be. I’m so glad I decided to take the plunge and just have a go anyway as it was utterly divine; so divine in fact that my Dad and I managed to eat a four portioned size dessert between the two of us! Certainly greedy piggies yesterday.

Funnily enough for a first attempt at something I decided to just go for it and make the recipe up as I went along, after a good bit of research mind you. Google et al and my library of cookery books are a great source of information but sometimes you just need to go it alone.

Clafoutis I have come to conclude, is one of the most seductive of puddings. It’s made by hiding a layer of plump, fruit (traditionally un-pitted cherries) under a blanket of thick, fluffy batter, which is then baked until it billows beautifully, with the fruit protruding deliciously through the surface. The dish dates to the 19th century and is associated with the Limousin region of central France.

Apparently if other fruit is used (i.e. not cherries) the dish should be named Flognarde but I’m not about to split hairs over the matter, so call it what you will. The most important thing is that it tastes gorgeous, the added bonus is that it is so simple to make.

A drizzle of cream or a scoop of good vanilla ice cream wouldn’t have gone amiss but I didn’t save any cream and ice cream wasn’t lurking in the freezer so we had it plain, no bad thing, just a little extra dairy would have really lifted the pudding to new heights. I will keep this in mind for next time and believe me there will be a next time. This will become a spring/summer dessert staple in this house.

The key is not to over work the batter, doing so would cause the protein in the flour to open up and form long, elastic strands, which would make the clafoutis tough and chewy, rather than soft and yielding. So just mix enough to incorporate the dry ingredients, and no more.

You begin with a dish of lovely plump juicy berries. 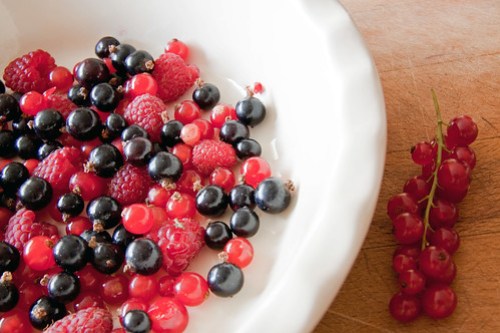 Before pouring over a thick, creamy, eggy batter to encase the fruit. At this stage I also drizzled over some red current syrup. 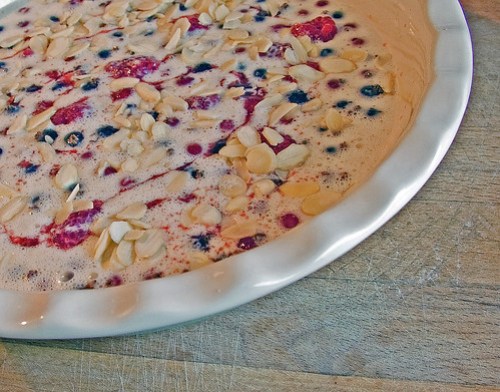 After around 35 minutes baking in a moderate oven all you have to do is allow the clafoutis to cool slightly (10 minutes maximum) and dust liberally with icing sugar before plating up. 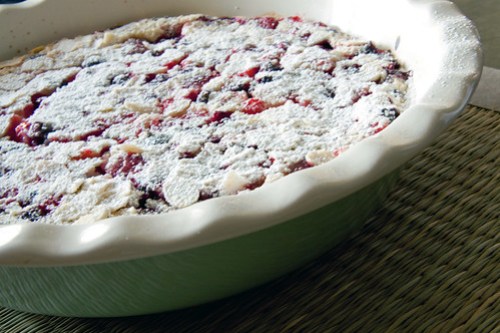