Yesterday I managed to finish work earlier than expected and yet still couldn’t find enough ‘get up and go’ to get into the kitchen and prepare dinner; a take out it would have to be. My local take out of choice is normally a pizza from a local pub simply because the other take-aways local to me are downright awful. It was then that I remembered on my work colleagues (a lady from Kerala) telling me about a fantastic Indian restaurant which had not long since opened which in her words “I must not miss”; after checking online it was evident that take out was an option too – what a perfect opportunity to put them to the test so to speak. That was settled; curry for dinner.

The restaurant in the spotlight was Anoki.

Anoki claim on their website to be totally different from the typical Indian restaurant experience usually had in the UK:

A world away from the traditional curry house, Anoki provides traditional Indian cuisine and a wide vegetarian choice devised from authentic recipes. Each dish is created using fresh produce and made to order on the premises by chefs trained at 5* restaurants in India.

I really wasn’t expecting anything so out of the ordinary but I definitely found it so. It is no wonder Anoki was named as one of the UK’s top ten Indian restaurants in The Times newspaper. 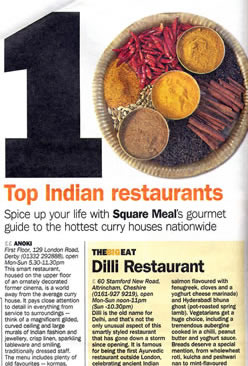 We certainly had quite a feast (I was hungry and struggling to choose from the menus delights so chose more than we actually needed) opting for onion bhaji, seekh kebabs, plain nan, peshwari nan, parathas, pilau rice, Goan sea bass curry, desi lamb curry, balti special mix, dhal makhani, and masala potatoes!!! Ok so I went a little overboard in ordering but hey, it was a treat and we enjoyed every last mouthful. The food was delicately spiced and had a lovely warmth to it without being too hot; although I have to admit the Goan curry made my eyes water but had the funny ability to do that yet leave my mouth ‘unburned’ and able to continue to appreciate the subtlety of the coconut and other spices.

While waiting for our order to be cooked I had some Indian tea (chai), I had to wait a fair while for it to be prepared but oh my it was certainly worth the wait. Chai (pronounced as a single syllable and rhymes with ‘pie’) is the word for tea in many parts of the world. It is a centuries-old beverage which has played an important role in many cultures. Chai from India is a spiced milk tea that has become increasingly popular throughout the world. It is generally made up of rich black tea, milk, a combination of various spices and sugar. The spices used vary from region to region and among households in India. The most common are cardamom, cinnamon, ginger, cloves, and pepper. Indian chai produces a warming, soothing effect, acts as a natural digestive aid and gives one a wonderful sense of well being. It’s difficult to resist a second cup (alright, alright, a third or fourth cup). This one was gorgeously fragrant with a heady aroma of green cardamom (and you avid readers know how much I love cardamom), and (I think) cassia. I know a little about chai preparation but it isn’t something I would often think to make at home, hence this was even more special. Now if only I had the recipe … mmmm.

Always one to people watch and take an interest in my surrounds, I was lucky in that my seat gave full view of the kitchen doors, giving my opportunity to ‘spy’ on the creative delights emerging from the kitchen. The food looked to be very creatively and artistically presented, in such a way that wouldn’t be out of place in a Michelin stared place. It was obvious that a lot of care and attention had been put into the food and as we all know food prepared with love and care is food that reaches higher levels of taste satisfaction.

Anoki most certainly did not disappoint, from excellent service, stunning presentation (traditional dress and beautiful decor) to the utterly outstanding food; this is a place I will return to again and again; hopefully eating in the restaurant sometime soon too.