“British bread is a nutritional, culinary, social and environmental mess – made from aggressively hybridised wheat that is grown in soils of diminishing natural fertility, sprayed with toxins to counter pests and diseases, milled in a way that robs it of the best part of its nutrients, fortified with just two minerals and two vitamins in a vain attempt to make good the damage, and made into bread using a cocktail of functional additives and a super-fast fermentation (based on greatly increased amounts of yeast), which inhibits assimilation of some of the remaining nutrients while causing digestive discomfort to many consumers.” – Andrew Whitley

If you haven’t already done so, my suggestion is you try lay your hands on a copy of BREAD MATTERS: The State of Modern Bread and a Definitive Guide to Baking Your Own

(Andrew Whitley) as it is an absolute bible of a bread book (it is currently being sold at a discount on Andrew’s marvellous website too). David Baker of the Financial Times sums the book up perfectly in three short sentences:

“The best food book of the year. Part counterblast against the shocking state of British baking, part manifesto for us all to get our hands floury and do something about it. Essential reading for anyone who cares about their daily loaf.”

BREAD MATTERS: The State of Modern Bread and a Definitive Guide to Baking Your Own

begins by describing in detail how complex, and scandalous to adulterations modern bread making are affecting our current health state; use of the Chorleywood process, the additives (calcium propionate, amylase, chlorine dioxide and L-cysteine hydrochloride to name but a few), the huge amounts of yeast, the wheat hybrids bred to take advantage of intensive modern chemical agriculture, the unseemly rush from flour bag to shelf, all of which force onto the public a superficially attractive product that is doing most of us active harm – it is hardly difficult to equate our increasing levels of ‘wheat intolerance’ and digestive problems with this modern method of bread baking; the two seem to go hand in hand.

As well as the almost frightful insight into modern baking this book, Whitley has dotted interesting historical footnotes to recipes and practical tips to recover from baking disasters. The book is comprehensive in its span of recipes and its examination of the baking process and whilst some recipes appear advanced or complicated at a first glance on reading through they are so clearly written that even a truly novice baker could attempt with relative ease and succeed.

While I’m on my soapbox bread-box about the state of our mass produced bakery products I’m going to urge you to look here at the Real Bread Campaign website. There you can join up for email alerts, read more about what real bread is and its virtues but (and how nice is this?) you can search to find good bakeries near you; so if you’re ever stuck for bread and unable to bake your own for whatever reason you have a resource available to you.

Andrew is also a firm advocate of using organic flour (as I am too) to keep the nutritional content of the bread high and the chemical content low. There was a recent news article that claimed organic and non-organic are of equal nutritional value but that doesn’t hold with me I’m afraid. Excellent organic flour can be bought from Shipton Mill.

Having made Scottish Morning Rolls before with great success I was keen to try them again but with a different recipe and here is where Andrew Whitley’s amazing book comes in. His recipe uses the overnight ‘sponge’ method. Whilst use of a sponge method requires a little more foresight on the part of the baker it does not mean more effort or a more difficult bake; just a little more time planning that is all.

The recipe can be found here along with some more interesting bread facts and another couple of Andrew’s excellent recipes too.

Overall the dough requires less yeast to begin with – though presumably if the yeast reproduces, the end result has just as much. Whitley says this method was used by bakers from the late 19th Century, when commercial yeast was available but expensive. The other reason for using this method, and of more relevance to the small-scale hobby baker, would be that a longer fermentation is meant to add to the flavour and improves the nutritional quality of the loaf.

The original recipe does include a percentage of wholemeal flour alongside the strong white flour but I decided to stick to just using white flour instead. The rolls were to be filled with bacon and fried eggs so the idea of adding wholemeal didn’t appeal for that use but I will try wholemeal out at one stage too.

As per my usual habit I used my KitchenAid (on speed 2) to knead the dough but you could do it by hand if you so wish, as Whitley’s book says it doesn’t matter how you knead, as long as you work the dough energetically for at least 10 minutes, subjecting it to ‘vigorous stress’.

I baked the rolls in a springform cake tin as I thought it would make for interesting presentation. 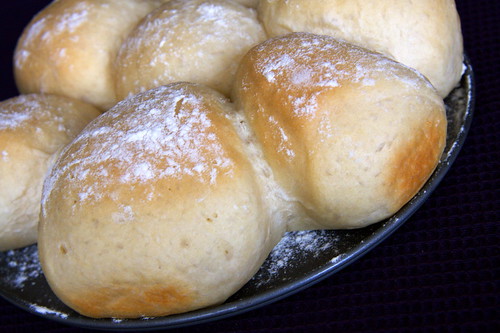 The rolls were ultra light and fluffy but slightly tangier than the others I made, probably because of the longer ferment. 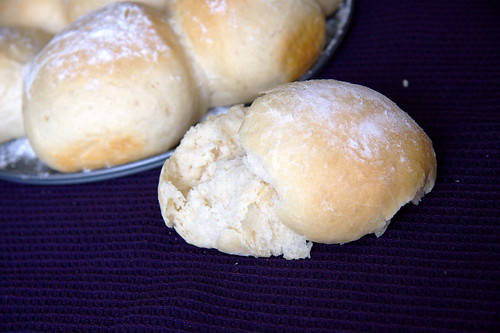 Don’t put it off any longer – BAKE! I am entering these to YeastSpotting too as they are too good to not shout about.