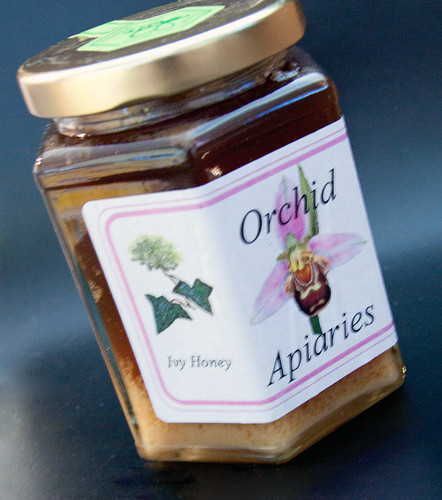 Honey is a pale yellow liquid, sweet, viscid and edible, collected and processed by bees from the nectar of flowers. The word honey comes from the Arabic hon which became in old English honig degenerating gradually to honey. The German word is still honeg.

Honey has been found in the tombs of ancient Egypt, where a jar of still edible honey was discovered in the Tomb of Queen Tyi’s parents. It was thought to be 3300 years old. Evidence has been found of honey being used by the Egyptian, soaked on bandages to form a ‘plaster cast’ for broken bones.

Considered by the Ancient Greeks to be sacred, and by the Hindus as a miracle food. Honey has been used as a sweetener in our diet long before the discovery of sugar. When the ancient Phoenician traders came to Britain for lead and tin they found the population consuming great quantities of honey and called Britain the Isles of Honey.

Honey is also hygroscopic, antibacterial, and is antiseptic. It is claimed to have medical and cosmetic properties, but beyond dispute is the unique and special flavour it adds to cooking.

Honey is of course produced by bees, and we must act to save our honey bees. A third of UK bee colonies have been lost over the last two years. There is strong evidence that neonicotinoids – a class of pesticide first used in agriculture in the mid 1990s at exactly the time when mass bee disappearances started occurring – are involved in the deaths. The evidence against these chemicals is strong enough that they have been banned or suspended in France, Germany, Italy and Slovenia – but unfortunately not yet in the UK.

Neonicotinoids work as an insecticide by blocking specific neural pathways in the central nervous systems. The chemicals impair communication, homing and foraging ability, flight activity, ability to discriminate by smell, learning, and immune systems – all of which have an impact on bees ability to survive.

It seems bees genetic make up makes them particularly vulnerable to neonicotinoids. Recent mapping of the bee genome has revealed that bees capacity to detoxify chemicals is much lower than other insects. Instead bees have two strategies to protect themselves. On the first day of foraging in a new area, scout bees are sent out first to taste the nectar and pollens – if any are adversely affected they will be expelled from the hive immediately, and the colony will avoid the area. In addition to this, once foraging begins, nurse bees in the hive clean foragers each time they return. These strategies protect the colony from mass exposure to lethal doses of chemicals, but they do leave honey bees particularly susceptible to sub-lethal exposures to any contaminants they encounter.

The other really important factor is the complex behaviour of honeybee colonies. For example, the 10,000 forager bees in a typical hive need to co-ordinate their quest for nectar – and they do this through the famed ‘waggle dance’, which communicates the flight direction and distance to sources of nectar. The complexity and precision of these dances is breathtaking, and success relies on the integrity of a nervous system where each synapse is crucial. It is no surprise then that honey bees have been shown to have a higher number of neurological receptors than other insects.

Honey bees live and work as a colony, not as individuals; what seems to be happening is that the cumulative impact of small doses of nenoicotinoids on thousands of bees over time is affecting individual bee’s ability to work and communicate effectively as part of a colony. Because lots of bees in each colony are behaving sub-optimally this can lead to the sudden, and devastating, outcomes that we’ve been witnessing in recent years. Please do take the time to click here and sign up to help our bees.

So after the brief history of honey bees and their golden nectar I bet you’re wondering what this has to do with a blog entry categorised as “bread”, well it’s quite simple really – I made a bread incorporating some gorgeous honey. It was a pumpkin seed and Ivy Honey Malted Bread.

The ivy honey came from The Big Blue Sky shop in Norfolk, which you can read about here in detail (please do take the time to, the store is glorious), and as such was guaranteed to be a local product. It was produced by Orchid Apiaries who offer from resident apiaries traditional Norfolk honey, a blend of nectars gathered by the bees through the season. I bought the ivy honey purely out of curiosity, I had no idea what the flavour would be like at all; it turns out to be rather earthy and tinged with a note of coffee, yet with a medicinal overtone but not at all in a bad way. I wish I’d bought more than one jar, it really is a good job I’m going back to Norfolk soon. The only downside to ivy honey is that it crystallises very quickly and hence doesn’t look so pretty sitting on the pantry shelf but that has no effect on the flavour at all, it is purely cosmetic.

I used malthouse flour from Shipton Mill to provide the backbone of the bread dough; it is one of my favourite and most used flours right now. It encompasses white wheat flour which is blended with three malts – whole crisp golden malted wheat flakes provide a delicious texture; a malted barley gives a soft rich malty flavour; and the dark malted rye gives a nutty flavour and relatively dark colour. A tablespoon of the ivy honey was added to the dough also which helped enhance the sweet malty flavour of the bread.

The risen dough was brushed with an ivy honey and water solution before gently being rolled in pumpkin seeds and baked. Pumpkin seeds are good sources of iron and zinc and of omega-3 fatty acids making them a great addition to a healthy loaf.

by Daniel Stevens I decided to try giving the loaf a second rise, something I had never thought to try out before, Daniel says this will help improve the texture and flavour of the finished bread and that it can be repeated up to four times. He is right, the texture and flavour were better, slightly closer in crumb and definitely more flavoursome in a wholesome yeasty kind of way; next time I will go for three rises

With a lovely soft and tender crumb the bread made for excellent sandwiches and great toast (ever so sweet then) but don’t do what I did and put the bread in the toaster, believe me trying to get out stuck pumpkin seeds is no fun at all, use the grill instead. 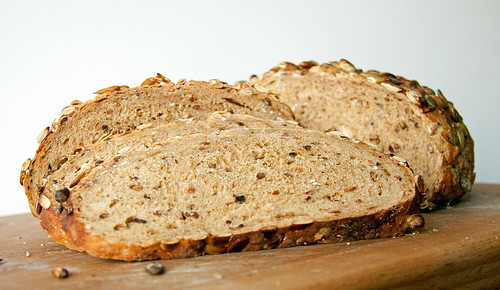 I only used half the dough for covering in pumpkin seeds and honey wash, the other half I formed into a batard which I dusted with rye flour and slashed before baking. Rye flour gives a lovely grey dusty colour to the bread once it has baked which contrasts well against the cooked bread. The batard was of the same flavour as the loaf but had a chewier crust due to it’s shape and the slashing of it. The batard was best simply sliced and served with ultra fresh creamy butter. 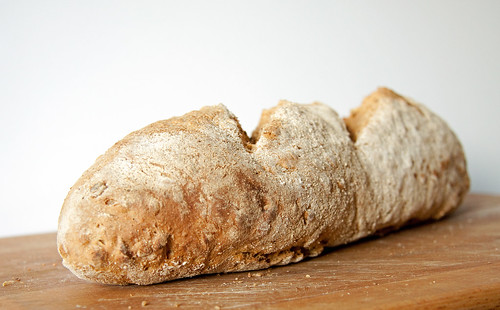 I am of course entering this bread to YeastSpotting which this coming week will be hosted by Nick of Macheesmo.