As some of you may be aware I have reviewed products on behalf of Abel & Cole on previous occasions and I have always been pleased with the quality of the goods sent. I was very happy to learn that I would be getting another product to review, a pack of two duck fillets.

Before I begin to discuss the duck and what I did with it I thought it would be a good idea to write a little about why I think organic is the best way to go, especially after all the slightly negative press it has been given through our (UK) media recently. So here goes:

If you want to read more about the future of food in the UK please do have a look here, it’s a long but very informative read.

The duck fillets were rather expensive in comparison to the ones I had bought at my local butcher for the Bill Granger noodle dish I made a short while back, but, the flavour was out of this world; I would be more than happy to pay for the excellent quality of these.

Another thing I really liked about the Abel & Cole product is the packaging, not only was the county of origin shown but the name of the farmers too, giving a more personal feel. Now I realise that supermarkets do this too, along with a lot of sneaky usage of outside farm photos to imply the animals are having a wonderful life even if they are indoor reared, but here I know that is not the case – just good honest and detailed labelling which is inclusive of the Soil Association logo. 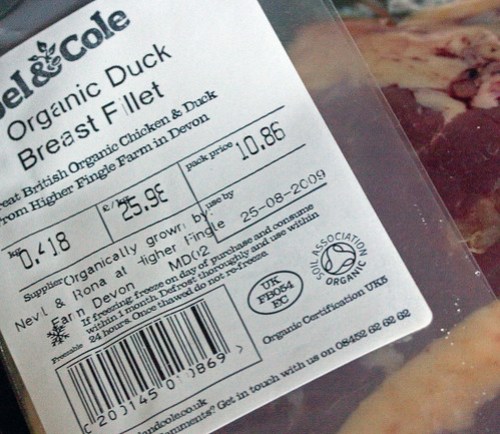 As you can see from the photo the meat was a lovely dark colour, indicating it had been aged (according to the website, it is hung for four days) and the lovely marbling of fat goes to show that the ducks had a good outdoor life with plenty of activity to keep them fit. Nevel and Rona have won numerous awards for their poultry, including a Gold Award at the 2005 Taste of the West Awards. It is this hanging process and marbling of fat that provides the exceptional flavour, and the only way to get that is by outdoor rearing.

So what did I decide to do with the duck? Well I had lots of ideas and was originally thinking of going down an Oriental theme but thought better of it as I seem to have cooked rather a lot of Oriental inspired dishes recently and when I reviewed a chicken for Abel & Cole I went for a Chinese theme there. In the end I went for a French inspired dish of Hot Salad of Puy Lentils and Confit of Duck. 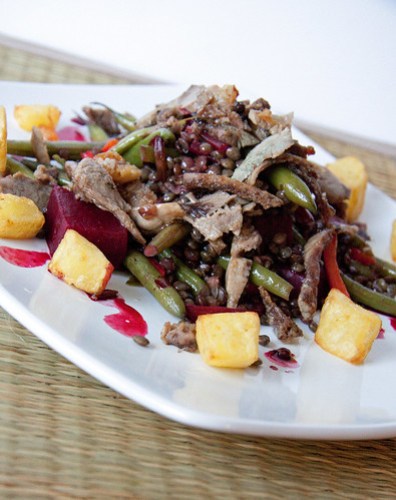 (Hugo Arnold) which is an absolute delight of a book which focuses on simplicity and goodness in rather exciting variants, simple food paired up well and sometimes with a little ‘razzle dazzle’ for when something a wee bit special is required. The puy lentil salad is of my own making.

Duck confit is most frequently made using duck legs but surprisingly the fillets worked really well, cooking times obviously had to be reduced and I had that down to some guess work but all paid off; the duck was succulent, moist and incredibly tender but not in the least bit fatty (something I was rather worried about due to it being cooked – almost poached – in goose fat).

Puy lentils are small slate-green lentils with a delicate blue-grey marbling. Puy lentils are considered by many to be the best lentil because of their unique peppery flavour and the fact they hold their shape during cooking. As with Castelluccio lentils puy lentils are also rather earthy in flavour but rich and creamy almost in texture to eat. I paired the lentils with steamed green beans, sugar snap peas, beetroot that had been baked en papillotte, sweet red pepper and and crispy fried potato cubes.

I used my actifry to cook the potatoes but it could very easily be done either in a frying pan or in the oven, just fry or bake until the potato is cooked through and golden crisp. I think the key thing here is that I used some of the fat from the confit to roast the spuds, giving them a lovely flavour which was in keeping with the rest of the dish – they then became an integral part rather than a side dish.

The addition of plenty of vegetables meant that the two duck fillets would actually have fed four people quite easily (the three of us had good sized portions and I am having the leftovers for lunch today) making the meal much more affordable for an average family.

Steaming the green vegetables allowed them to keep an al dente crunch which worked well alongside the meltingly tender duck, juicy beetroot and crispy potatoes. The dish came together like a dream.

As I felt the meal would need a little extra moisture I reserved the cooking juices from the beetroot and reduced them with a good splosh of balsamic vinegar (I stress here that you don’t use your best one) to create a light reduction to spoon over and around the plate. Looks rather pretty with the vivid pink against the blue/grey lentils don’t you think? 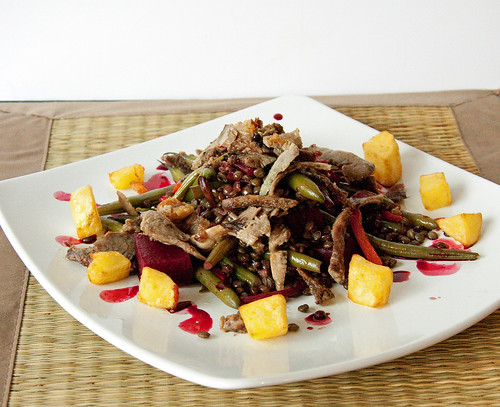