Don’t get me wrong I love a challenge, and sure, isn’t that why I joined the Daring Bakers? This months challenge though nearly tipped my challenge enjoyment level over the edge, it wasn’t difficult as such but just such a palaver. I spread the challenge over two days (very unlike me) to try and give myself more time and be more organised; but alas it was not to be, the kitchen still looked like a whirlwind had just passed through. To top it all I didn’t even really enjoy eating the finished challenge bake enough to feel it sated my initial stress.

The August 2009 Daring Bakers’ challenge was hosted by Angela of A Spoonful of Sugar and Lorraine of Not Quite Nigella. They chose the spectacular Dobos Torte based on a recipe from Rick Rodgers’ cookbook Kaffeehaus: Exquisite Desserts from the Classic Caffés of Vienna, Budapest, and Prague. 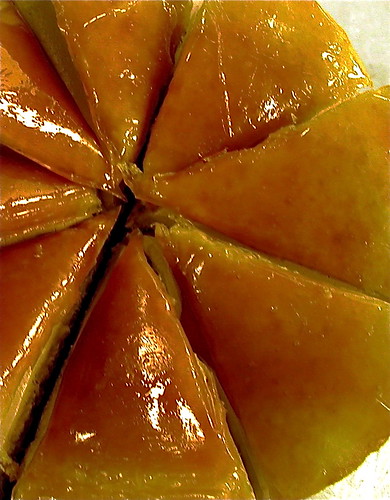 The Dobos Torte is a five-layer sponge cake, filled with a rich chocolate buttercream and topped with thin wedges of caramel. (You may come across recipes which have anywhere between six and 12 layers of cake; there are numerous family variations!) It was invented in 1885 by József C. Dobos, a Hungarian baker, and it rapidly became famous throughout Europe for both its extraordinary taste and its keeping properties. The recipe was a secret until Dobos retired in 1906 and gave the recipe to the Budapest Confectioners’ and Gingerbread Makers’ Chamber of Industry, providing that every member of the chamber can use it freely.

Simple ingredients make this elegant Hungarian cake, but the process is rather complicated, you really do have to be patient, organized, thorough, oh and did I mention patient. A kitchen with plenty of workspace helps too! However I do want to stress it is not difficult, just complicated! The two are very different – here you have plenty of stages to complete, but none of them overly taxing.

We had free-reign with the cakes flavourings so I went for a coconut enhanced sponge with white chocolate and Amarula liqueur buttercream.

Coconut essence is lovely stuff, it smells like a Bounty Bar in a bottle.  For those of you not in the know a bounty bar has a very sweet and slighty chewy coconut filling covered with milk chocolate (sold in a blue wrapper) or dark chocolate (sold in a red wrapper) and is one of the few chocolates to come wrapped in two individual halves. If I want ‘trashy’ chocolate I really do enjoy these.

The fruitiness of the coconut worked really well alongside the Amarula – Amarula is originally a Zimbabwean cream liqueur which was manufactured in South Africa, It is made with sugar, cream and the fruit of the African Marula tree (Sclerocarya birrea) which is also locally called the Elephant tree or the Marriage Tree. Amarula is far too sweet and sickly for me to drink, even over ice, but in baking it becomes a lovely fruity background note.

Pairing the fruity liqueur with white chocolate probably wasn’t the wisest choice I’ve ever made as it made the buttercream even sweeter and rather too rich, a dark (minimum 70% cocoa solids) chocolate would have been a much better choice and perhaps more enjoyable.

The caramel was very simple to make, caramel no longer holds any fear over me now, in fact I rather enjoy it. I did succumb to using my sugar thermometer to judge when it was ready to pour though. I did find it a little too sharp in lemony flavour, so (not that there will be a next time) should this ever have to be repeated I would advise the amount of lemon juice be cut down by half. Maybe I just had strong lemons?

I decided to skip decorating the sides of the cake with nuts as we are not huge fans of lots of nuts on cakes, the few hazelnuts nestling under the caramel discs were quiet enough for us.

My family really enjoyed the torte, so maybe I was just overwhelmed by the process of baking it and by the point of eating was actually too fed up of thinking about it to fully enjoy it. 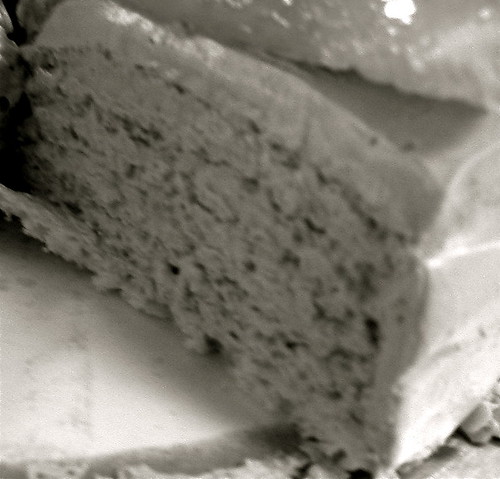