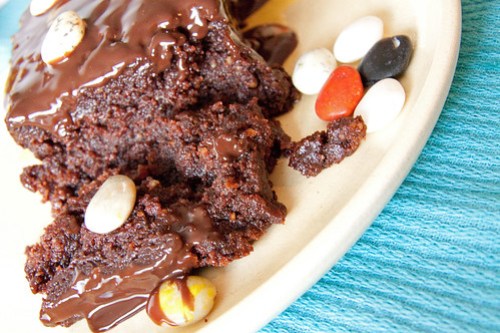 One of my favourite liqueurs is Frangelico. Most often I’d just sip it, with ice is good, as a ‘digestivo’ but it is also good to bake with.

Frangelico is a hazelnut and herb-flavoured liqueur  which is produced in Canale (Piedmont region of Northern Italy). It was released in the 1980s, gaining attention largely because of its unusual packaging: its bottle was designed to look like a friar, complete with a real knotted white cord around the waist. The origins of Frangelico date back more than 300 years to the existence of early Christian monks living in the hills of Northern Italy. According to Barbero, the manufacturer in Italy, the name of the liqueur is based on a legend of a hermit named Fra. Angelico who “created unique recipes for liqueurs.” However, the bottle itself most closely resembles the habit of a Franciscan friar, while the liqueur’s likely namesake, the famous painter Fra Angelico (d.1455), was a Dominican, whose robe would have been white and without the cincture.

Frangelico is made in a similar manner to some other nut liqueurs in that, nuts are crumbled up and combined with cocoa, vanilla berries, and other natural flavours, and then left to soak in the base spirit. After the spirit has absorbed the flavour of the ingredients, the liqueur is filtered, sweetened, and bottled.

The producers say it has a rich texture and pronounced but delicate hazelnut flavour with hints of vanilla and dark chocolate’ smooth, long finish with fragrant back-note. I couldn’t put it any better myself.

Anyway enough of the history, and back to baking. I used the liqueur to flavour a Mississippi Mud Cake. It is believed that the cake got its name from it closely resembling the muddy banks of the Mississippi river.

Wherever it got its name and origins from, I’m so glad it did! The cake is utterly divine. Almost like a huge loaf of a brownie, sticky, gooey, chewy but crisp on top too. What is there not to love about that?

Certainly not one for the dieters though, I’m sorry about that, no way of getting round it folks – just take a peak at the recipe below and you’ll see what I mean. Sometimes though a little naughtiness is just what we need in the culinary stakes and sure doesn’t it make us feel better?

The hazelnut flavour of the Frangelico really comes through as a pleasant back note, working well with the deep chocolate flavours radiating from the cake itself.

I decorated with chocolate pebbles but they are by no means essential. What is rather grand is to serve the cake with a wee drop of the Frangelico alongside – perfecto! 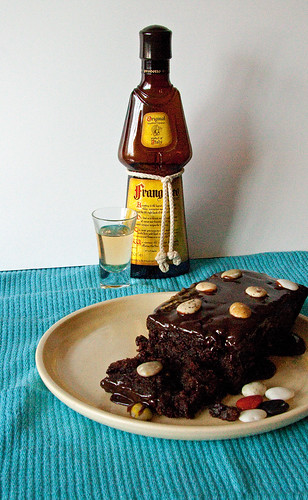