Dinner the other evening came by way of Nigella Express

(Nigella Lawson), in however a slightly adapted way. Please note here that the recipes following are my adapted versions and not Nigella’s original.

We had buttermilk chicken with New Orleans coleslaw which I served with some crispy potato wedges. 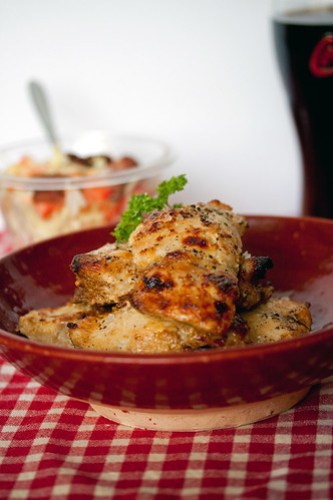 I have to admit I was dubious about the coleslaw, I’m not a massive fan of coleslaw anyway but this just didn’t seem to fit a regular recipe pattern – maple syrup, vinegar, buttermilk (which I swapped to sour cream), this didn’t seem at all right; but hey, I was very nicely surprised as the coleslaw was tangy but slightly sweet, light but creamy and not at all cloying or sickly which I sometimes find it to be. Shockingly I went back for second helpings and my mum did too, now that is saying something as she is the worlds biggest hater of mayonnaise LOL

I got some wary glances when the pecans were found but everyone loved them, they added a vibrant, sweet, buttery crunch and they really would be sorely missed if they got left from the dish.

The Pecan (Carya illinoinensis or illinoensis) is a species of hickory, native to south-central North America. 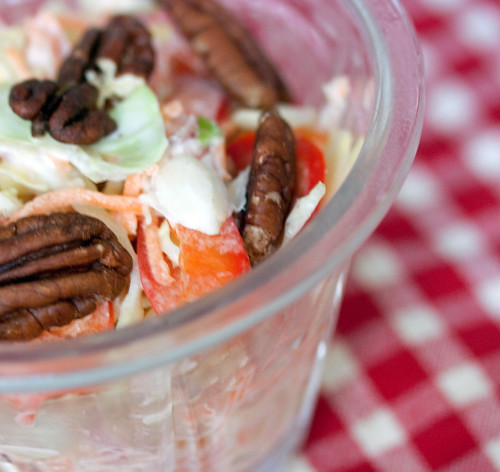 The chicken was beautifully tender, partly due to the quality of the chicken and partly due to the use of buttermilk in the marinade. Buttermilk is a great tenderiser and this way of marinading must be tried by all at least once, well, I say at least once but once you try it you will not turn back. The buttermilk doesn’t lend a creaminess to the chicken at all and it doesn’t impart a flavour, just a sweet tenderness.

The crushed peppercorns give it a kick here and there when you bite into it, so if you don’t like that, I would just use freshly ground black pepper instead. This rather gentle warming heat when combining with (my addition of) the old bay seasoning the flavour is superb. Bay seasoning containscelery seed, bay leaf, mustard seed, both black and red pepper, cinnamon, and ginger, making it an intensely flavoured blend. Typically it is used most with seafood dishes but trust me it works well with chicken too.

Whilst this was fabulously good hot for dinner it also made for an interesting and flavoursome cold lunch the following day. The coleslaw kept well in a sealed container for three days, I’m sure you’ll have eaten it all by then anyway but I wouldn’t risk leaving it any longer.

Of course to complete the American diner feeling I had to make sure a glass of ice cold Coca Cola was on hand.