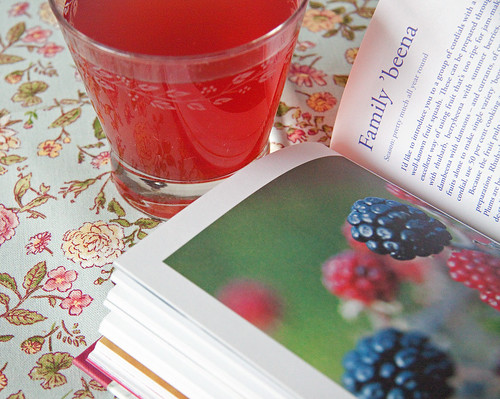 When I was a young girl if ever I was feeling poorly hot Ribena was the order of the day, it never failed to make me feel better. Now I’m sure the high vitamin C content helped a little but for the most part I dare say it was just that that cup of hot berry drink came supplied alongside a huge dose of love and care.

This idea of berry drinks making folks feel better was what inspired me to make my latest preserve, cordial. My Dad has recently had a rather chesty cold and so I thought a dose of ‘Beena and TLC were in order.

I always have a glut of apples sitting in my fruit bowl and I had been lucky enough to have been given a huge bag of damsons by my friend Jo. Flavour combination sorted then; damson & apple.

The damson or damson plum is an edible drupaceous fruit, a subspecies of the plum tree. Sometimes called the Damask Plum, damsons are commonly used in the preparation of jams and jellies. The plum spirit slivovitz is made from fermented damson fruit, the making of damson wine and damson gin are also popular uses for the fruit.

The original recipe idea is based around the Family ‘Beena from the fabulous book Preserves: River Cottage Handbook No.2

(Pam Corbin); once again River Cottage have produced a book of outstanding quality. Pam Corbin discussed the art of preserving in such a friendly, yet informative way that you almost feel she is there in the kitchen with you, guiding and hand holding as you work at this culinary marvel. For me at least there is nothing better for making you feel like a true cook, or Kitchen Goddess come to that, than making pots of preserves.

The making of preserves is a good way to make the most out of every season, stretching the more bountiful months into the sparser ones and for those of us dedicated to local, seasonal eating that is one joyful experience. I’d rather be eating some strawberry preserve on freshly made brioche in the winter than an imported strawberry that’s for sure.

Preserves are something I now feel comfortable and confident with but not so long back I really did feel that they would be extremely difficult and such a messy event that I put them off.  It was the making of tayberry & apple jam last October that convinced me otherwise, and yes Pam Corbin’s delicate words didn’t go amiss either. I hope I can convince you, my readers, to venture into the mists of the preservers kitchen too; have a look here at some of the preserves I have blogged to get your taste-buds in action.

One of the easiest places to start must be the making of cordials, you don’t have to worry about setting points, pectin or anything more troubling than making sure you sterilise your bottles. The simplest way to do this is to put them through the dishwasher on the hottest cycle but should you not have a dishwasher or not want to use that method, more information on how to sterilise bottles and jars can be found here.

The damson & apple cordial is sweet, yet slightly tart and makes for either a refreshing cold drink or a warming and soothing hot one; just perfect for easing a sore throat; it would I’m sure also make a great mixer in alcoholic long drinks. Another use earmarked for it is for drizzling over cakes/cheesecakes, reducing down for dessert syrups and you could also (in a I need jam now emergency) just boil the liquid until setting point is reached. Now how versatile did you really think a bottle of cordial could be?

I also added some cinnamon to the pan of fruit as I cooked it, firstly because I love the flavour and warmth it gives and secondly because it is used extensively in Ayurvedic medicine, amongst many other things cinnamon is considered a good remedy for irritating cough, common cold, allergic rhinitis, and acute and chronic sinusitis. 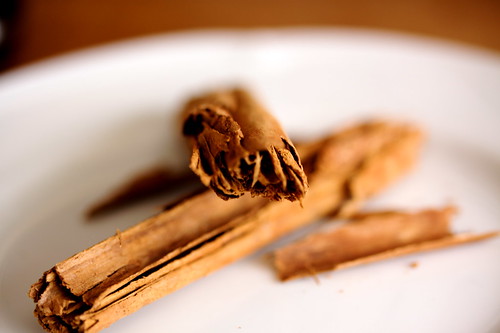 When making up hot drink to help soothe a sore throat and aid healing I add a teaspoon of Manuka honey to the cup, as research is showing that active Manuka Honey is effective against Streptococcus Pyogenes, a bacteria which causes sore throats. Propolis is an antibiotic collected by bees and used in the hive to protect the bee colony from disease and bacterial contamination.

I’m keeping a bottle reserved for medicinal purposes and am hoping to make many more bottles besides, now all I need are more damsons.