“Cream – Rich as an Irish Brogue

Sugar – Sweet as the tongue of a Rouge

Irish Whiskey – smooth as the Wit of the Land”

Whether I’m just having a melancholy moment or whether it was seeing all the stunningly beautiful Connemarra scenery in Single Handed the other evening I’m not sure but I had a craving to bake something with an ‘Irish theme’. I hunted through some of my Irish recipe books but either I wasn’t overly inspired or I didn’t have the ingredients to hand so I ended up adapting a chocolate cake recipe and turning it into an Irish Coffee cake. 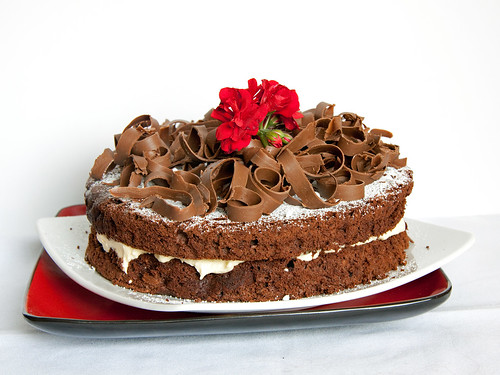 Irish Coffee can be exceptional if made well and in the winter time it is one of my favourite late evening tipples. You must of course make sure you use Irish whiskey not the Scottish whisky.

The original Irish coffee was invented by Joseph Sheridan, a head chef at Foynes, County Limerick. Foynes’ port was the precursor to Shannon International Airport in the west of Ireland; the coffee was conceived after a group of American passengers disembarked from a Pan Am flying boat on a miserable winter evening in the 1940s. Sheridan added whiskey to the coffee to warm the passengers. After the passengers asked if they were being served Brazilian coffee, Sheridan told them it was Irish coffee

I added an Irish coffee flavoured coffee (from Boaters) to the cake mix which gave a subtle hint of coffee to the cake although I didn’t really detect the ‘Irish Cream’ it was supposed to be. Next time I will just add an espresso and a shot of whiskey too as I think that will give a much rounder and deeper flavour.

In my madly compulsive rush to bake I forgot to check the availability of my baking staples – flour, butter, eggs etc and on coming to weigh out the flour I realised my cake flour bag was empty and I’d no more stashed away! What a to do when I’d got bowels of melted chocolate and whisked eggs sitting on my work-top. Then the thought of spelt flour dawned on me, I remembered the lovely Shyvas over on Violets Pantry telling us that she often used spelt flour in cakes and I’d a huge bag of that sitting staring at me from the cupboard; oh well it’s worth a shot I thought and used it (white flour). I couldn’t believe how good the result was. I was really worried the cake would be heavy and wouldn’t have a good rise with using spelt but I was wrong, do try it out yourselves, you won’t be sorry you did; that I promise you.

The method used in this cake involves separating the eggs and whisking the egg whites seperately before folding them gently into the cake mix before baking, not only does this help the cake stay lighter in texture but it helps give a slightly truffle like centre and chewy crust to the cooled cake too.

The cake was filled with a Baileys cream, simply whipped cream with a good splosh of Baileys added. Baileys is a creamy whiskey based liqueur. Baileys was the first 44% liqueur to use cream and alcohol together in a manner sufficiently stable to allow commercial distribution. The alcohol in Bailey’s is produced from a bacterial fermentation of whey. The cream and alcohol, together with some whiskey are homogenized to form an emulsion, with the aid of an emulsifier containing refined vegetable oil. This process prevents separation of the whiskey and cream during storage. The quantity of other ingredients is not known but they include chocolate, vanilla, caramel and sugar.

The addition of the Baileys to the cream helped increase the ‘Irish Coffee’ flavour the cake had and although it could hardly be considered a healthy option it certainly was a delicious option. Desserts and cream cakes are hardly for the moments when you want to feel overtly virtuous and healthy, so I figure that calorie counting is an activity to opt out on in these times of pleasure – save them for another day.

Dusting with icing sugar and decorating with chocolate curls brought the presentation up to scratch for serving as a dessert, although don’t get me wrong this cake is fabulous any time of day – it really is an effort not to dig in every time you pass the cake platter. The chocolate curls are so easy to make, just melt the chocolate in a double boiler and for every 200g of chocolate add 1 teaspoon vegetable oil, spread the melted chocolate onto a greased tray or on silicone matting and leave to cool before using a potato peeler to take strands of chocolate, they will curl up of their own accord. If you’re wondering, the addition of the oil makes the chocolate more malleable and as such the curls less likely to break. I went for milk chocolate curls as I thought they would contrast well with the rich darkness of the cake.