Science in the Kitchen and the Art of Eating Well by Pellegrino Artusi is a classic Italian cookbook that is written with passion, humility, irreverence and humour. It was a great milestone in Italian cookery books, being the first one to combine a collection of the fundamental recipes from all the regions of Italy. Until this point books were based purely on regional specialities.

Artusi had a lot of problems getting someone to publish his book as it was thought at the time that no-one would want to but a collection of regional recipes. Yet it was an instant success. First released in 1891 it had reached its fourteenth edition by 1910 when the author died.According to the Artusi’s Italian culinary bible, the Sienese are famous for their sweet bakes, with panforte, ricciarelli and  cavallucci being the main specialities.

Whilst the recipe collection is outstanding it is Artusi’s prose and the way in which he describes the recipes that really makes this book such a pleasure. His sense of humour certainly comes through when he describes a recipe for Polpettone (better known as meat loaf).

“Dear Mr. Meat Loaf, please come forward, do not be shy. I want to introduce you to my readers.

I know you are modest and humble, because, given your background, you feel inferior to many others. But take heart and do not doubt that with a few words in your favour you shall find someone who wants to taste you and who might even reward you with a smile.”

Science in the Kitchen and the Art of Eating Well is more than just a recipe book, it is a book for the true food lover, it is a unique work that exalts the pleasure of eating.

It is from this must have book, that the recipe for my Ricciarelli cookies came from. The method used by Artusi was a little outdated so I used a (slightly adapted) method from Judy’s fabulous blog Over A Tuscan Stove. 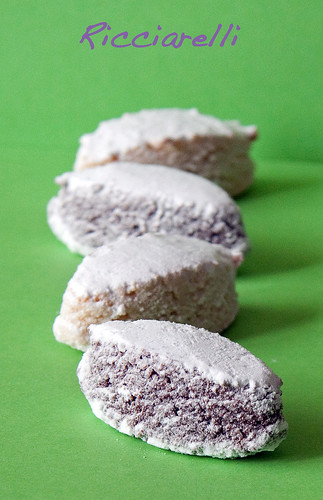 Ricciarelli are soft, light, ground almond based cookies, often laced with the scent of orange, that originated in Siena (Italy). They are typically served during the Christmas festivities but increasingly are available all year round. These sweets are always served with a light dusting of icing sugar giving them an angelic appearance which implies that they are to be looked at and never touched (although there is another version of this dessert where the sugar is replaced by chocolate: the so-called ricciarelli rozzi), and now it is becoming popular to add a little cocoa to the mix too.

Ricciarelli are perfect served alongside a glass of sweet dessert wine such as Vin Santo.

According to a local popular legend in Siena, it was Ricciardetto della Gherardesca from Siena who, on his return to his castle near Volterra, Italy from the Crusades in the Middle East, first introduced these little cakes in his land. Since he noted that their form resembled the curly shape of Middle Eastern slippers (similar to the Turkish Sultan’s slippers), they were called “Ricciarelli” (from the word “arricciati”, which means “curled” in Italian).

Alternatively, these delicate cookies are said to be shaped like the almond eyes of Madonna’s by Renaissance painters.