“Bread is the king of the table and all else is merely the court that surrounds the king. The countries are the soup, the meat, the vegetables, the salad but bread is king.”
Louis Bromfield, American novelist  (1896-1956)

Oh sunshine where have you gone?

The weather has been a little challenging of late, to say the least. First we had the snow – much more than we would ever normally see, only to be followed then the big freeze. Roads and pavements were transformed into veritable ice rinks. The snow and ice has gone (for now at least) and we have seen it replaced with rain, rain, and yet more rain.

This seemingly unending rotten weather has left me craving a little summer warmth and as I’ve next to no chance right now of just being able to hop on the next plane heading to sunnier climes I have taken the plunge and gone for summer food instead , albeit in the form of a warm salad and fresh crusty bread. 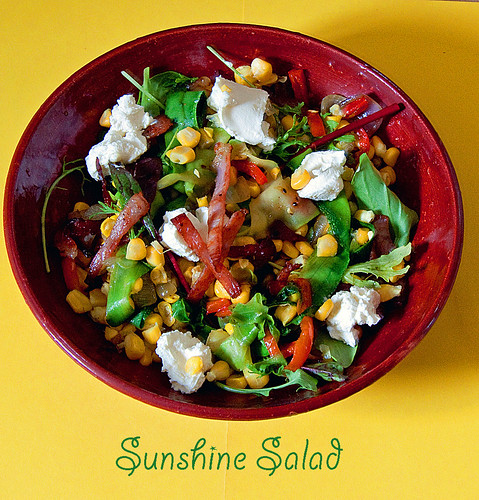 The salad needs no recipe, sure enough anyone could throw it together in next to no time. Simply put it is slivers of crisp bacon and hot sweetcorn (fresh from the freezer in this case, although, I’m sure fresh from the cob would be even better) tossed through some mixed salad leaves and dotted with ultra creamy soft cheese. The salad dressing? Extra virgin olive oil and a splash of sherry vinegar to give a slightly sharp edge to the otherwise very sweet salad. Oh yes, I used the said dressing to ‘deglaze’ the bacon pan so as to get all the lovely salty, fatty morsels that otherwise would have ended up being wiped out with kitchen roll and in the recycle bin.

The essential companion to this mood enhancing lunch? Bread, glorious bread. Oh and maybe some beautiful flowers for your table. What could be better on a cold, wet, wintery day that pottering around the kitchen, kneading bread dough, the oven preheating, warming the kitchen up and making it all toasty, the promise of sweet bread odors to permeate the air. This time around I made oak smoked oat bread. 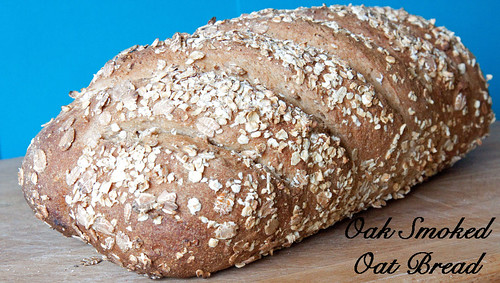 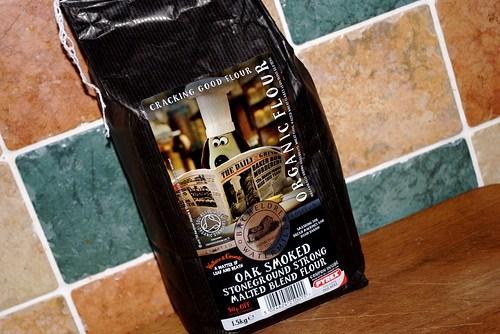 It’s a lovely dusky brown flour studded with nuggets goodness such as malt flakes, with such a delightful smoky aroma. The flour comes from Bacheldre Watermill and the flour obtains its smokiness from the malted wheat flakes getting cold smoked over locally sourced oak chippings for 18 hours in the smokehouse.

“The oak chippings infuse the specially malted wheat flakes with a delicious smokiness, the flavours work  really well. The slow cold smoking process infuses a sweet wood-smoked aroma and taste that is reminiscent of bread being baked in a wood fired oven.”

Matt has hit the nail on the head. A perfect crumb with a hint of smokiness which is not overly powerful, perfect plain with butter or good for a sandwich, toasted dripping with butter would be heaven itself.

Allowing the dough to rise three or maybe even four times is something you will not see in many bread baking methods but it does help yield a better texture, giving a bread slightly closer in crumb, and a definitely more flavoursome loaf in a wholesome yeasty kind of way.

The addition of oatmeal did make the loaf slightly more cakey in texture than an all wheat bread but that is no bad thing at all.

Matt suggest using this flour as a pizza base but I cannot see that working at all well myself, maybe I’m just blinded to using a proper Italian style base only, what do you think?