The other evening I had a huge desire to bake something, no surprises there then, with the lovely punnet of blackcurrants I had sitting in the fruit bowl. 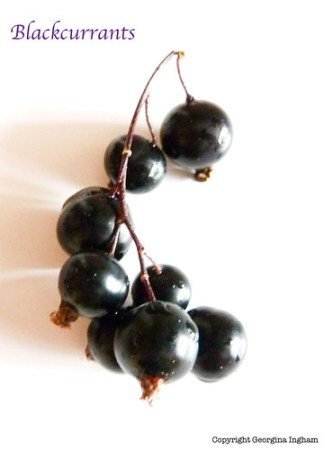 Blackcurrants (ribes nigrum) have grown in the British Isles for over five hundred years and this year they have been grown in my garden! Now, my small tree hasn’t exactly yielded a bumper crop but still it is nice to go and pick fruit fresh from the source. And, so I had to top up the quantity of blackcurrants for this recipe with bought ones

Blackcurrants aren’t known as a superfruit for nothing – they have been used by herbalists since the middle ages to treat bladder stones, liver disorders, and blended into syrups for coughs and lung ailments amongst other illnesses. The varieties grown in the British Isles are particularly rich and dark in colour, and possess a high content of anthocyanins, which in turn promotes antioxidant activity. Blackcurrants also contain more Vitamin C than any other natural food source as well as containing high concentrations of the beneficial nutrients of Potassium, Magnesium, Iron, Calcium, Vitamins A and B amongst others.

So, there you go. There’s much more to the humble blackcurrant than Ribena; although it was my childhood cureall and I must admit I am still rather partial to it if I’m feeling poorly.

I had intended to make a cake but I didn’t follow the recipe properly, most likely out of tiredness. Luckily though my ‘creation’ turned out a dream. 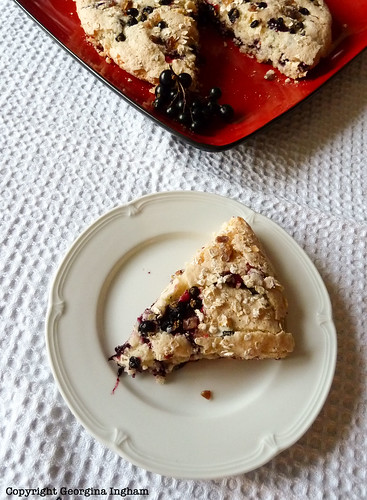 A crisp, chewy biscuit ‘cake’, somewhat reminiscent of the chew factor pavlova edges have. The scattering of a few oats accentuates the chewiness.

The addition of ground nuts and flour gives this bake more substance than a pure meringue but it still remains incredibly light. Perfect as a light afternoon tea treat. I used ground almonds but would imagine ground hazelnuts would work a treat too, as would changing the blackcurrants to red currants or a combination of the two.

Oh, if you’re bothered by such things as calories and fat content, you’ll be pleased to know this is fat free. Surely it (almost) constitutes a health-food with all these berries and oats.