Yesterday I received a lovely hamper full of goodies from the fabulous folk over at Capricorn Goats Cheese. I received them, after a great chat with @ethelthegoat over on Twitter, so that I could take part in the Capricorn Challenge (#capricornchallenge if you’re following over on the Twittersphere).

Straight from the goat’s mouth, here’s out this Capricorn Challenge works.

Here’s how it works:

– I send them a hamper jam-packed full of all my fave foods from Somerset and beyond
– They use the ingredients provided as inspiration – adding other tasty extras if they fancy! – to devise a lip-smacking recipe and post it on their blog
– I’ll try each recipe (what a life!) and select 6 finalists over the coming months – these will appear on my website: www.capricorngoatscheese.co.uk
– To finish off the challenge, I’ll choose my overall favourite recipe and the winning chef will receive a trip to Babington House in Somerset (it’s so plush – beats my pen any day!) and a year’s supply of Capricorn Goats Cheese

Before I get to bleating about food, how about a little goat history lesson?

Goats are extremely sociable animals with a strong herd instinct. They prefer to live in settled and familiar groups. It may surprise you to learn that goats are susceptible to stress, so it is vital that they feel calm and secure and are well cared for with a healthy and varied diet.

Capricorn Goats live in large, open straw-bedded barns designed to allow plenty of natural daylight and fresh air to enter and of course plenty of space for them to wander around. Goats like to be pampered and given the choice, prefer a cosy barn with their friends rather than outdoors suffering a British climate.

The goat was probably the first animal to be domesticated around 7000 – 9000 BC.

People of the Mediterranean have been making cheese from goats’ milk since around 10,000 BC.

The Romans ate small goats’ cheeses soaked in olive oil and Pharaoh Tutankhamun liked goats’ cheese so much he wanted tubs of cheese to be placed in his burial chamber.

The domestic goat belongs to the genus Capra and has possibly been developed from 5 wild species. It is a hollow horned ruminant with a beard and an upright tail!

In my hamper I received a Capricorn cheese with a photo of a goat called Flo and one called Ethel. 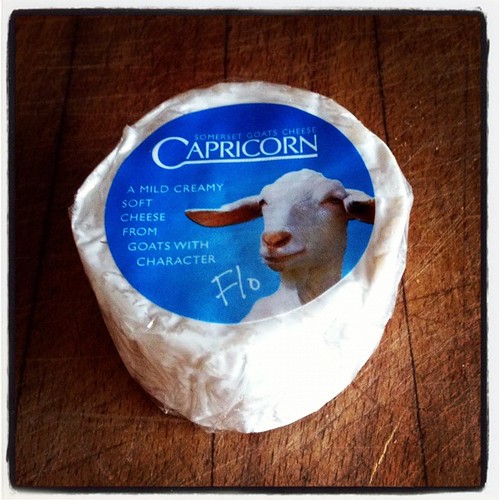 On Capricorn’s website you can look at the, light-hearted, profiles of their ‘goats on tour’ and I decided to use them as a bit of goatspiration for the creation of my dish. So Flo likes pancetta and Ethel likes salad … hmm …

The Capricorn cheese comes in 100g drums and has a delicate velvety soft white coat. 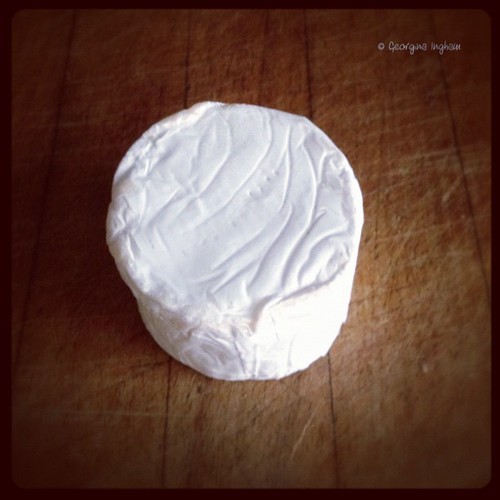 When young it is mild and crumbly and has a slightly nutty flavour. As it ripens from the outside towards the centre, the white curd becomes softer and creamier, and develops a fuller flavour.

Along with my two rounds of goats cheese I received:

Plus, you could use any store cupboard/fridge ingredients you had to hand.

After much deliberation and furious note scribbling I decided upon puff pastry parcels filled with goats cheese & pear, to be served with a warm salad of roasted vegetables and pancetta. Sweet, salty, creamy, fresh, fragrant. Oh yes. Swoon. 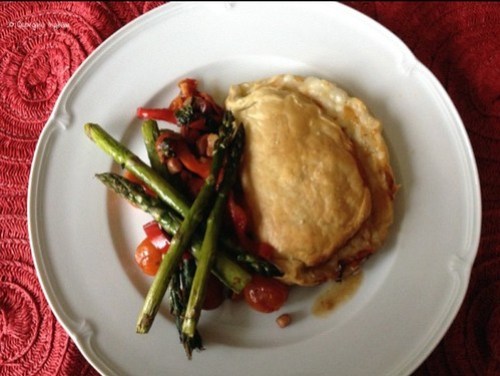 So, my added ingredients were pancetta and asparagus. 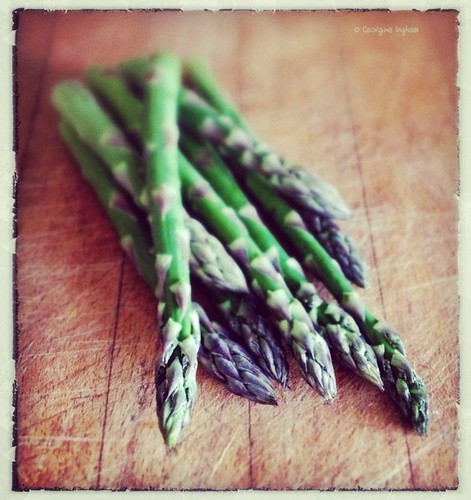 Goats cheese and pear are great companions, add in a little salty pancetta and this trio becomes heavenly. 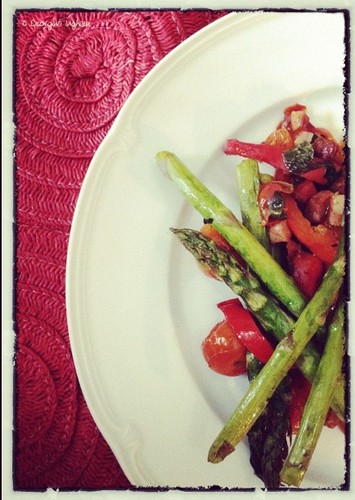 When you cut into these puff pastry parcels, the cheese oozes unctuously and the pear is soft and yielding. 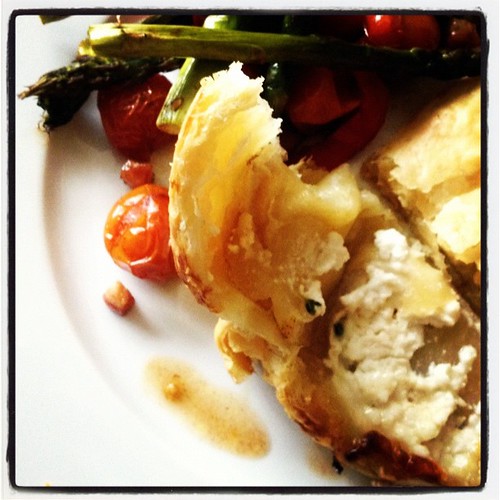 I made enough for 4 people, but was only serving 2. A conscious decision to ensure I’d got some yummy leftovers for lunch today. The parcels are just as good cold as they are hot.